Already battered by the coronavirus recession, governors and state lawmakers will be forced to make even deeper budget cuts over the next two fiscal years to areas such as K-12 education, as a result of big declines in state revenues, according to a new analysis,

New data from the National Association of State Budget Officers show that for the first time in roughly a decade — since the last recession —  a majority of states closed their fiscal 2020 books with a decline in general revenue funds.

The NASBO data cover states that end their fiscal year in June, which leaves out a total of five, including two of the biggest: Texas and New York.

According to the NASBO figures, those 45 states reported an average revenue shortfall of 6 percent in fiscal 2020, from a combination of sales, income and corporate tax collections, lottery and gaming revenue and other funding sources falling short of projections.

And the NASBO report came with a stark warning: Things are going to get worse before there’s any kind of rebound. As economic activity continues to be significantly depressed and unemployment remains high, the COVID-19 recession will continue to weaken state coffers throughout the current fiscal 2021 year.

Overall, it will be several years before states fully dig themselves out of coronavirus budget holes, according to NASBO, and future revenue losses stemming from the current recession are forecast to surpass “the 11.6 percent drop states experienced over two years during and following the Great Recession, with some states anticipating revenue declines of 20 percent or more.”

Without additional federal aid to offset these revenue losses, the report says, states will be forced to make deeper cuts to services and spending and turn to tax increases. That could, in turn, create a drag on economic growth at a time when the nation’s economy is attempting to recover. 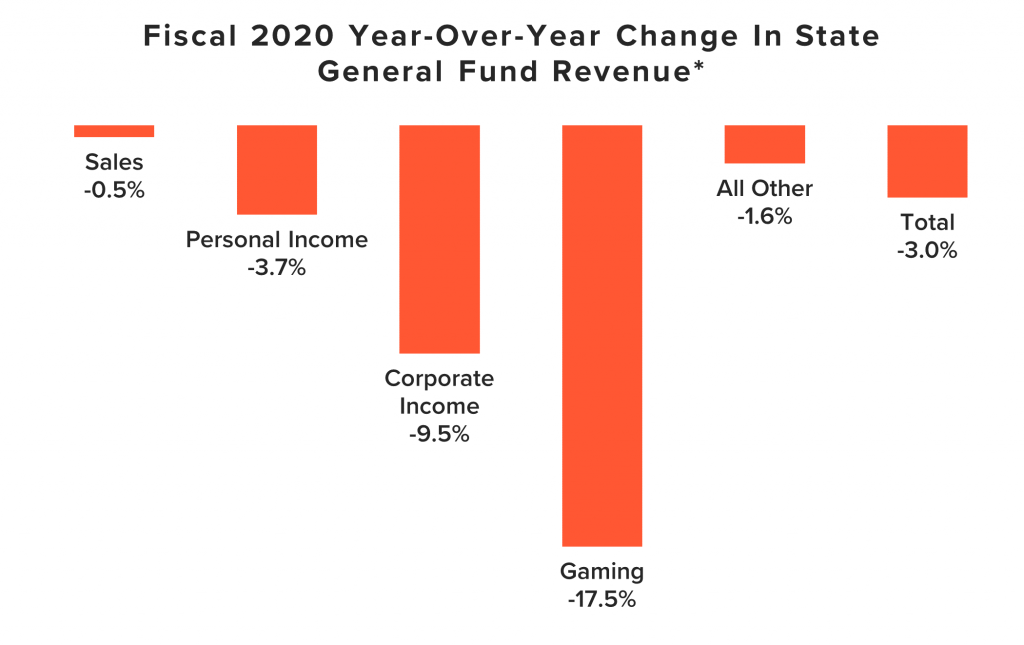 Budget Pain to Last Through Fiscal 2023?

Districts rely immensely on state funding sources, and school systems with relatively large Black, Latino, and low-income student populations can in some cases receive more than half their revenue from state aid.

Brian Sigritz, NASBO’s director of state fiscal studies, said governors and lawmakers dealing with large shortfalls are going to have to make cuts in areas like K-12 education, though it’s still not clear how big the revenue shortfalls or spending decreases are going to be on a state-by-state basis.

EdWeek Market Brief is hosting a summit to offer intel and insights to education companies trying to understand school district needs — particularly during COVID-19. You’ll hear directly from district decisionmakers, policy experts, company leaders, and EdWeek Market Brief’s editorial staff, who will break down key trends they see playing out across the K-12 landscape. You can sign up here.

In a moderate recession, K-12 funding might be spared from cuts, he said. “But what we saw in the Great Recession, and this time, when you’re dealing with large budget shortfalls, states are likely to turn to K-12 to make spending cuts,” Sigritz said.

He said most states are projecting “strained budgets” through fiscal 2022. By fiscal 2023, things could start to turn around, he said, pointing out that state coffers rebound from a recession at a slower pace than the national economy.

“Even if states start to see growth, we’re not expecting to see things quickly get back to where they were,” he said.

For now, Sigritz expects states legislatures to continue to slash spending, dip into so-called rainy day funds, and even possibly increase taxes in some cases to make up for shortfalls.

The speed at which state coffers rebound will depend on several things, he said, including whether Congress passes another COVID-19 stimulus package, which would lessen the need for spending cuts, and whether the country gets ravaged by a second wave of coronavirus during the fall and winter.

“If there is additional federal aid, if the economy does recover more quickly, it might lessen the need for these sorts of cuts by the states,” Sigritz said. “Lessen. Not eliminate.”

Key Takeaways From the Report:

— State coffers were fairly stable until the coronavirus:

“For the vast majority of states, only the last quarter of fiscal 2020 revenue collections were impacted by the economic fallout of COVID-19. Coming into this crisis, most states were seeing revenues coming in at or ahead of projections. This provided some immediate cushion for states to soften the blow of the precipitous declines experienced in the fourth quarter.”

“Even some states that ended fiscal 2020 with general fund revenues up slightly year-over-year had to make budget cuts or turn to reserves, since they still fell short of projected tax collections. Deeper cuts will be necessary in fiscal 2021 and 2022 as budget gaps grow wider due to an expected continued decline in revenues and rising expenditure pressures from the public health crisis, economic downturn, inflation and population growth.”

“Numerous states that enacted budgets for fiscal 2021 based on pre-COVID revenue forecasts have called special sessions to revise those budgets, eliminating pay increases and making cuts to baseline spending and personnel. Meanwhile, states that passed budgets after the onset of the COVID-19 crisis similarly cancelled planned investments, implemented furloughs and other actions, and cut base spending. Many governors and their administrations have directed agencies to develop contingency plans to reduce their budgets, for fiscal year 2021 and/or fiscal year 2022, by as much as 15 or 20 percent.”