The global market for educational technology hardware jumped by 16 percent over the past year, to nearly $15 billion, and is poised to climb by much more in the years ahead, according to a new analysis.

That surge is being driven by demand for mobile personal computers, which account for 63 percent of the total educational spending on digital K-12 hardware, reports Futuresource Consulting, a United Kingdom-based research and analysis organization.

The research offers new details on the growth in the worldwide market for K-12 ed tech, where demand is being pushed along by a variety of factors, including aggressive public investments in digital tools and systems, and growing amounts of disposable income among students and families in developing countries.

Chromebooks represent the biggest growth sector within the personal-computing arena, Futuresource Consulting found. The United States represents the largest market for Chromebooks by far, accounting for 90 percent of all shipments and revenue for those devices, according to Futuresource’s analysis, which was provided to Education Week.

Overall, growth in the ed-tech hardware market is expected to continue to climb, to $16.3 billion by 2019, at a compound annual growth rate of 8.6 percent.

While the largest share of the ed-tech hardware market, 48 percent, is based in North America and Latin America; 29 percent is in the Asia-Pacific region; and 23 percent is in Europe, the Middle East, and Africa, Futuresource says.

The potential for future growth in K-12 hardware varies significantly across individual countries and regions, said Mike Fisher, the associate director of the education division for Futuresource Consulting. A number of Latin American countries—including Argentina, Colombia, Mexico, and Uruguay—have made heavy government investments in ed tech, which has fed the market and will likely continue to do so, he predicted. Other countries outside the region, such as Turkey and Thailand, have made similar commitments.

In many nations, despite a wave of initial spending on ed-tech, the potential for major new acquisitions is “still very significant,” Fisher explained. While in others “the growth rates will continue to slow a bit.”

In China, interest in ed-tech hardware is being fueled, in large part, by a need for “front of class” tools, such as interactive whiteboards and flat panel screens, Fisher noted. Major investments in classroom computer technology, such as 1-to-1 computing projects, have yet to take hold to any great extent, he added. 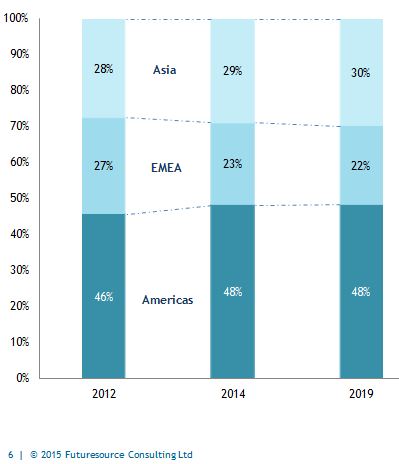