The business climate for dealmaking in the K-12 marketplace should be a favorable one in 2015, according to Mary Jo Zandy, a managing director at Berkery Noyes, a New York-based investment bank.

“I think it will be a good year for M&A activity in education in general,” said Zandy, whose firm recently released its 2014 Education Report, tracking sales and purchases of education companies that serve students and professionals from 2012 to 2014.

“With school funding improving, and with expenditures going into ed-tech rather than basic instructional materials, some of those [ed-tech] companies have grown to a more critical size, and you’ll see greater valuations of them,” she said in a phone interview.

“Also, as a whole, K-12 visibilty has improved, so people are less apprehensive about spending money in that area.”

While that was the largest transaction in K-12, others involved Washington, D.C.-based ed-tech provider Blackboard making five acquisitions (although not all associated with K-12), and Boston-based education content provider Houghton Mifflin Harcourt’s acquisitions of two companies. In the assessment area, ACT, the Iowa City, Iowa nonprofit that develops the ACT college admissions test, acquired Pacific Metrics, a Monterey, Calif.-based provider of online testing and automated scoring.

The following Berkery Noyes chart illustrates how K-12 deals are trending over the past three years, compared to those in higher education and the professional training markets. 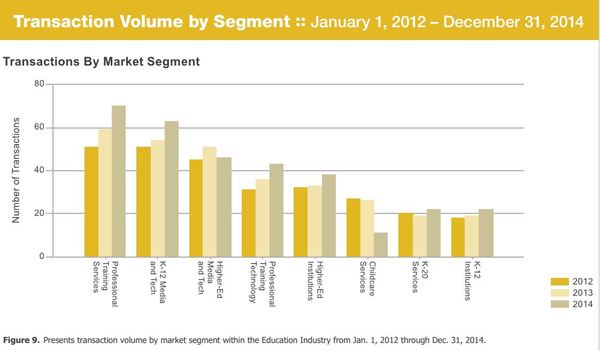 Readers can follow mergers and acquisitions that affect the education marketplace in the K-12 Dealmaking entries on this blog. Recent entries: