K12 Inc., a publicly traded online education company that had experienced significant drops in its stock value in recent years, was the second highest “gainer” on the New York Stock Exchange at the close of business on Thursday, following the release of its second quarter earnings report for fiscal year 2015.

A number of factors influenced  the stock’s performance, including earnings per share that were better than expected and some favorable news delivered by the company’s chairman and CEO, Nate Davis, in a conference call Thursday morning.

Davis cited the Herndon, Va.-based company’s prospects for opening new cyber schools in various states and counties, and the fact that revenue growth from the Fuel Education part of its business is “now coming in as planned.” Fuel Education is a divsion of K12 Inc. that offers personalized learning platforms, teacher professional development, consulting, and Web-based courses.

Last year, the company faced a major setback when the 10,800-student Agora Cyber Charter School in Pennsylvania decided to become self-managed beginning July 1, 2015, rather than continue to pay the company to manage it.  Davis conceded that the Agora situation remains a challenge in terms of predicting income. The school plans to continue using K12’s curriculum, under a 3-year contract beginning in 2015-16, which is good news for the company. But the amount of money K12 receives for its curriculum services is dependent on how many students the cyber charter school enrolls, and how much curriculum it uses. If it attracts fewer students, that would mean less revenues for the company. And, if Agora develops some of its own curriculum, that would reduce revenues, because it would need less of K12’s.

But that possibility didn’t seem to dampen the spirits of Wall Street. The company’s stock, which trades under the ticker symbol LRN, opened at $11.22 per share on Thursday. It jumped to $14.45, and ultimately closed at $14.40 per share, which meant investors interpreted the results as “good news,” according to Trace Urdan, a managing director and senior analyst at Wells Fargo Securities, LLC. 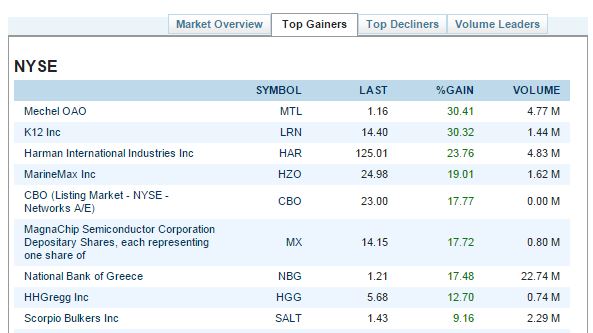 Urdan said the prospects of more virtual school business and more digital content sales were viewed favorably by investors, as was the fact that the results beat the consensus among analysts that K12’s projected earnings per share would increase by 29 cents per share. Instead the earnings per share increased by 33 cents.

Davis pointed to a larger context in his conference call remarks: “This means schools are beginning to accept online learning as a mainstream curricular programming solution,” he said. “Fundamentally, this also means districts and their teachers are using online courses to replace textbooks and other content historically utilized in the classroom.” 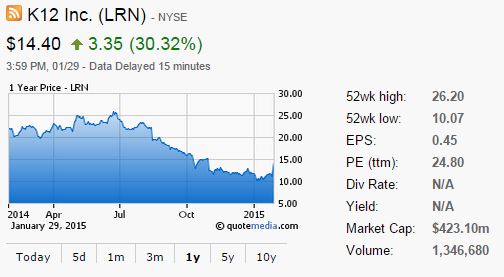 It’s worth noting that when interviewed by Education Week last year about K12’s troubles and declining stock price at the time, Gary Miron, a professor of education at Western Michigan University who conducts research on for-profit and nonprofit education management organizations, predicted the increase.