At a time when school districts across the country are desperate for funding, California’s Proposition 15 would seem poised to do its part to help schools in the state in a major way.

The ballot measure, which state voters will vote up or down tomorrow, would raise taxes on commercial and industrial property, by assessing them based on their market value, not purchase price.

[UPDATE: While pre-election polls had shown that California voters were narrowly in favor of Proposition 15, results from election night indicated that the ballot measure was poised to fall short of passing by a slim margin.

The state’s election tallies, which were not yet final, indicated Wednesday morning that a bare majority, 51.7 percent, of voters rejected the ballot measure, while 48.3 percent of voters approved it, out of a total of about 11 million voters cast. State officials said 94.5 percent of the state’s precincts had partially reported results, and that totals could change during the canvassing period.

EdSource also reported that with 99 percent of the precincts reporting, the “no” vote stood at 51.7 percent.

The results would appear to represent a setback for school districts hoping for a potentially major infusion of money into K-12 education.]

Estimates of how much new money the ballot item would channel to schools vary.

But the California Legislative Analyst’s Office has said it would eventually would raise taxes by between $7.5 billion and $12 billion per year. Some of the money would be offset by new costs, such as a decrease in personal and corporate taxes, which would leaving $6.5 billion to $11.5 billion annually. Of that amount, 40 percent would go to schools and community colleges — mostly based on how many students they have, says the LAO.

The measure is likely to have implications for companies and other organizations in the key state education market, if districts end up with new running room to pay for programs and products.

The measure simply needs win a simple majority of votes from Californians to take effect. Recent polls have shown that more voters favor than oppose it, albeit narrowly. A poll released late last month by the nonpartisan Public Policy Institute of California found that 49 percent of voters back the measure, and 45 percent are against.

Here’s how public opinion has changed from September to October: 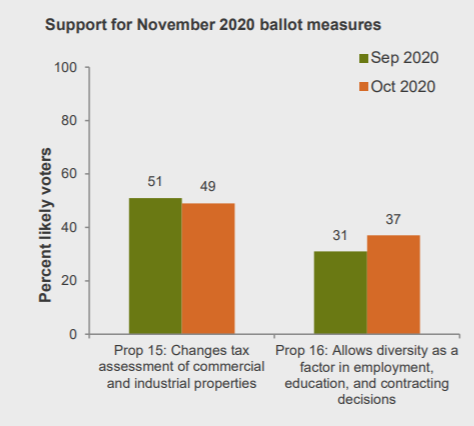 Democrats and younger voters tend to back the measure much more strongly than Republicans. Less than half of homeowners approve of Proposition 15, the PPIC found.

(The graphic above also alludes to Proposition 16, a constitutional amendment that would repeal Proposition 209 and allow the reinstatement of affirmative action programs in public education and employment, within certain bounds of the law. The measure has been shown to have limited support in polls.)

One of the distinctive features of the proposition, he added, is that voters are not being asked to directly change how much they’re taxing themselves and their homes, because the ballot item focuses on commercial property. In that sense, he said, there’s been “nothing like it” in California’s recent ballot history.

“The polls here have been remarkably consistent – voters are divided,” Baldassare said.

For a broader sense of sense of the issues at stake for the education market in the 2020 election, please see EdWeek Market Brief’s recent breakdown by Brian Bradley. He writes about ballot measures, and the impact of races at the state and federal level.