Latin America’s ed-tech market is on the cusp of a potential seismic shift, jolted by a surge in high-speed Internet access across the region, the growth of startups backed by venture capital, and an uptick in demand for digital products stemming from COVID-19.

That analysis comes courtesy of HolonIQ, a research firm that uses data analytics to size up global education markets. The company recently named its 100 most innovative ed-tech startups in Latin America.

Most of the companies on the list hail from the region’s two largest economies. Most cater to the K-12 market (as opposed to higher ed or pre-K). And most deliver products in two categories: digitized content for curriculum and what HolonIQ refers to as “upskilling.”

Education companies from Brazil and Mexico dominate the list, making up 53 percent of the 100 businesses.Click to Tweet

The list, which does not rank the startups, is supposed to serve as a resource for schools, universities and ministries of education looking for new ed-tech partners, a way to “shine a light on organizations in the region really leading the pack,” said Patrick Brothers, the co-CEO of HolonIQ.

It can also provide a window into the market for vendors — what’s hot and what’s not. HolonIQ puts out similar lists for education markets around the world, and recently released a top 100 for China and top 50 in Southeast Asia.

The Latin American market was of particular interest, said Brothers, because it is at an “inflection point in the curve.”

Even before COVID-19 forced its education system to adopt distance learning on a mass scale, the region was experiencing an uptick in mobile and landline broadband access, and its ed-tech landscape was growing “in size and quality,” he said, marked by increased venture capital investments and an education system reaching out more frequently to digital education companies for learning solutions.

“Latin America is a much smaller part of global ed technology,” said Brothers. “But across the region it’s reaching a critical threshold and with the COVID tailwind we expect it to be a more meaningful part of global technology.”

HolonIQ assessed more than 1,500 Latin American digital education startups. The companies sell products in areas such as STEAM and coding, language learning, tutoring and test prep, management systems and advanced technology. Most of the time, companies apply for inclusion on the list. Sometimes investors or an institution using a product nominate a firm.

From there, HolonIQ comes up with a score for each. That process relies on data from the HolonIQ global platform, information submitted by companies, consultations with experts and customers that use the tech tools, and a startup rubric measuring everything from access to VC funding to quality of a firm’s products to experience and the diversity of the team running company.

In most cases, said Brothers, the companies that made the list have established relationships and long track records with education institutions or have “built something that is pan-Latin American.”

“This is the consequence of an incredible amount of effort by these startups,” he said. “There’s some organization across Latin America doing some amazing things that didn’t make the top 100.”

A snapshot of some of the key takeaways:

Innovation Across the Continent

Companies from Brazil and Mexico dominate the list, accounting for a total of 53 percent of the startups on the top 100. That’s no surprise, said Brothers, given the sheer size of the two education systems and the number of individual schools and universities available for companies selling in those countries. (See a graphic depiction of the breakdown across countries, below.)

What was more surprising, Brothers said, is the array of promising startups in smaller countries such as Chile, Peru, Venezuela, and Guatemala. There’s an appetite for ed tech, he said, “not just in the big cities and big countries,” but throughout the region. 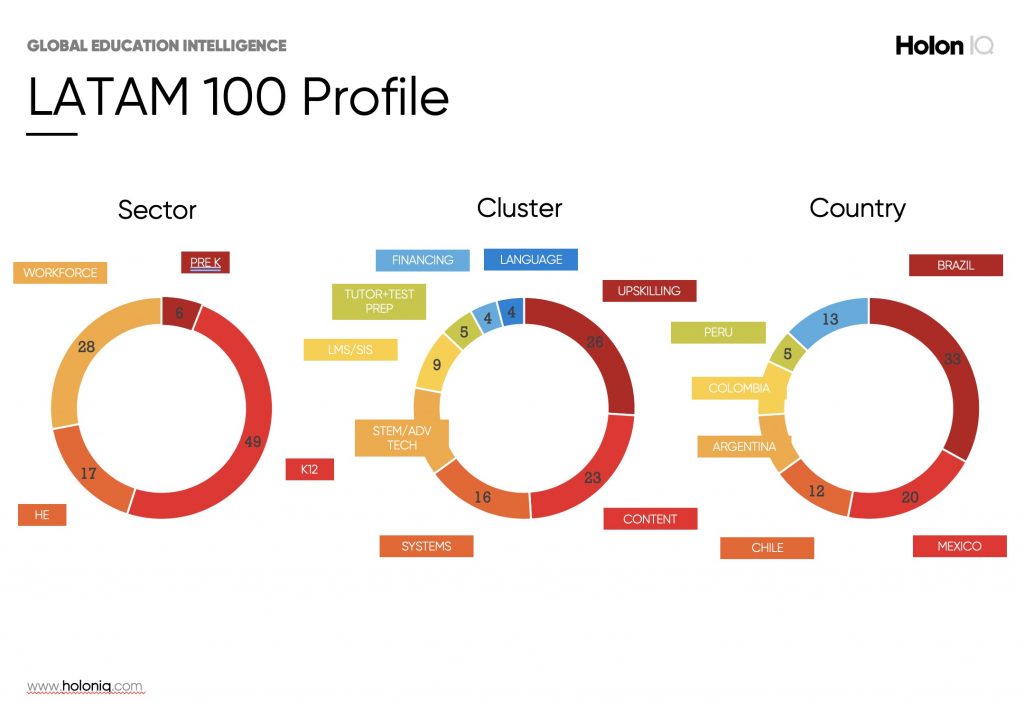 Since the list was released last week, the reaction from Latin American schools and universities has been fairly consistent in saying, “we had no idea the market is as big as it is,” Brothers said.

“Most people are unaware of the depth of innovation across this market,” he said.

One country that stands out is Colombia, Brothers said, where the city of Medellin, once infamous for its drug trafficking and violence, has been transformed into a progressive hub for artificial intelligence research and development. The city has attracted new companies, talent, and VC investments.

With the backing of the country’s government, there’s a mandate of sorts in place to build ecosystems revolving around AI innovation in Medellin— and that includes ed tech.

“We’re likely to see more of that,” he said, “as ed tech reaches a critical mass in each of these countries.”

There’s an overwhelming demand in Latin America to bolster the education-to-employment pipeline, so ed-tech vendors are focusing a lot of their attention on tailoring learning solutions for workforce upskilling.

That includes platforms and tech tools for career planning or to become more proficient in professional workplace skills. More than a quarter of the top 100 list offers those products.

Brothers cited STEM and coding or web development as examples where credentials can be earned before graduating high school to make a job candidate more enticing to a potential future employer. In some cases in Latin America, he said, workforce upskilling is being built into high school curriculum “so when a student leaves school they don’t leave just with a national school certificate, they leave with a whole bunch of credentials.”

Those dynamics help “explain to us why workforce upskilling was so large,” in Latin America, Brothers said.

Companies with content-based learning solutions — everything from digital textbooks to digitized courseware of some variety — make up the second-biggest product focus on the list. Brothers said the share of Latin American companies developing content tools is larger than in other markets, and those “local startups are serving that gap with rich and effective cultural content.”

Most people are unaware of the depth of innovation across this market.Patrick Brothers, HolonIQ

Meanwhile, Brothers noted that companies with language learning tools make up a generally smaller slice of the overall pie when compared to other global regions, in particular Asia where learning English in schools is “a massive market.” While there is an enormous appetite for learning English in classrooms across China, for example, in the Latin American market it’s just not as relevant, said Brothers.

“There’s less of a gap for startups to fill,” he said.

The growth in internet connectivity pre-COVID-19 has been another factor driving the growth of the ed-tech market in Latin America, according to HolonIQ. Improvements in the speed and reliability of web access in schools and homes has also been credited over the past few years with creating opportunities for ed-tech growth in other markets around the world, too.

Nearly half the companies on the list are selling tech products geared for the K-12 market. Brothers said the Latin American K-12 market is fueled by a robust interest for nuanced communication tools, ranging from learning management systems to platforms that connect students, teachers and parents.

At the same time, international companies with their foot already planted firmly in the communication and LMS space, “have yet to penetrate the Latin America as much as they have in their home markets,” Brothers said. As a result, the market is more robust for local startups.

On the other end of the spectrum, very few companies focusing on the pre-K space made the list: only about 6 percent. The vendors working in that space are providing platforms to help parents with child development before school and are mostly play-based learning games.

Pre-K share is typically bigger in emerging markets around the world, Brothers said, in particular as “parents and communities at large are thinking about pre-K less as childcare and more as actual early learning.”