In two separate decisions issued last week, a pair of U.S. appeals courts made contradictory rulings on the sweeping health care law championed by President Obama and approved by a Congress divided along partisan lines in 2010.

Both cases are focused on the subsidies provided to consumers who obtain coverage under the law—subsidies that in turn are linked to the law’s “employer mandate” that applies to businesses, as well as schools.

Meanwhile, a similar, though not identical case is pending in Indiana, having been brought by the state’s attorney general, Greg Zoeller, and a group of school districts. See my Education Week story from last year examining that case, and the overall impact of the health care law on schools.

The Obama administration has said it will appeal the D.C. decision to the full appeals court.  If the courts remain in conflict, a legal challenge could eventually go to the U.S. Supreme Court, which in 2012 upheld core pieces of the Affordable Care Act a separate case.

Under the health care law, consumers are allowed to receive subsidies when they buy insurance on exchanges established by states.  More than two-thirds of the states, however, decided not to set up their own exchanges—in many cases because of Republican opposition to the law. They instead chose to rely on the federal exchange to provide subsidies.

The plaintiffs in the two appeals court cases, and in Indiana, argue that the letter of the law says that only individuals in states with exchanges “established by the state” qualify for federal subsidies. The law does not, they contend, provide subsidies for individuals in states that haven’t set up an exchange. (Indiana is one of those states.)

Why does this matter for school districts?

Because individuals in states who buy coverage from the federal exchange do not legally qualify for subsidies, the plaintiffs say, employers in those states, including districts, cannot legally be penalized for not offering full-time employees health insurance—through the so-called employer mandate spelled out in the law.

The districts in Indiana have said that the law will force them to choose between paying a lot more in health care costs, or cutting back employee hours to move those workers below the threshold for full-time employees required to be offered health insurance, under the law.

In February, the Internal Revenue Service published rules that eased the employer mandate rules, stating that medium-sized companies with the equivalent of 50 to 99 full-time employees, including schools, will have an additional year, until 2016, to provide affordable coverage under Obamacare. The IRS also eased the deadlines on larger employers to comply with the law.

The case in Indiana has clear parallels to the two cases heard recently by the appeals courts, in that it challenges the subsidies provisions, Jim Hamilton, a lawyer representing the districts, said in an e-mail to Education Week.

If one of the cases went to the U.S. Supreme Court, as some expect, and a definitive ruling was made on the subsidy issue, it would be binding in the Indiana case, too, Hamilton said. If the ruling was more limited in scope, the implications could be more nuanced.

The Indiana case does raise a new argument that the two appeals court cases do not, Hamilton added. The lawsuit argues that the penalties created in the law infringe upon the sovereignty of the state, and its public schools, he said, in violation of the Tenth Amendment of the U.S. Constitution.

To Indiana’s attorney general, Zoeller, the conflicting appeals court rulings underscore “the need for the United States Supreme Court ultimately to decide whether the IRS exceeded the authority Congress granted it” under the law, he said in a recent statement. 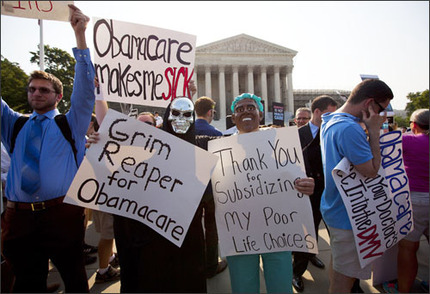 The Indiana lawsuit, he added, seeks to “get public-sector employers out from under the draconian tax penalties of the employer mandate.”

The Indiana case is currently pending before the U.S. District Court for the Southern District of Indiana.

Critics of the lawsuits, and some legal scholars, describe the challenges as attempts to seize upon what amounts to a drafting error when Congress wrote the law. They say federal lawmakers clearly intended that individuals should be eligible for federal subsidies, with the goal of enrolling as many of the uninsured as possible.

Those critics also say the courts, including the U.S. Supreme Court, traditionally have rejected challenges of this sort, deferring to the intent of congressional lawmakers. Others say there’s strong legal precedent for the courts, when confronted with ambiguous language in a contested law, to defer to the agency charged with interpreting the law—in this case the IRS, which has said the federal subsidies can go to individuals in states without exchanges.

Of course, many legal observers also cast doubts on the arguments made against the “individual mandate” in Obamacare, only to see the U.S. Supreme Court decide two years that the provision ran afoul of the Constitution’s commerce clause. (The court upheld the foundation of the health care law, however, in ruling that the mandate was valid as a tax.)

Kenneth Mason, an Overland Park, Kan., attorney who represents public and private sector clients, including school districts, said “the better argument is in favor of the government” defending the law, based on legal precedent.

“I’m not advising any of our clients, school districts or otherwise, to put their compliance efforts on hold,” Mason said.

At the same time, conservative members of the U.S. Supreme Court have shown an inclination toward adhering to the text of statutes, Mason said.

Even if the subsidies provision was struck down by the courts, Mason said, it’s possible that states could through regulatory or other means take creative steps to allow individuals to receive federal subsidies.

Like Mason, Susan Relland, the chief executive officer of American Fidelity Administrative Services, which consults districts and other employers on the law, said K-12 administrators should not assume the law will unravel in the courts.

Relland, a lawyer, represented employers before Congress when federal lawmakers were drafting the law.

“Our advice is to not treat [any of these court decisions] as a reprieve,” Relland said. School districts need to “keep complying as they did before…the law has not been overturned.”

Photo: Demonstrators gather outside the U.S. Supreme Court in Washington on June 28, 2012, the day the high court affirmed the legality of the Affordable Care Act. By Evan Vucci/AP-File.