After more than 80 years of providing student-friendly twists on current events, classroom magazine Weekly Reader will be folded into Scholastic News, its parent company, Scholastic, confirmed Wednesday. The news, first reported by the New York Post, comes just months after Scholastic purchased the publication in February.

The New York Post reported all but five of the publication’s staff of 60 will be laid off. Hugh Roome, the president of Scholastic’s professional and classroom magazines, wouldn’t confirm that information but said the 60 employees staffed by Weekly Reader “is approximately right”. He said 30 Weekly Reader customer-services employees in New Jersey would be laid off, some employees based in parent company Reader’s Digest’s White Plains, N.Y., office would be kept on, and others were offered “preferential treatment” in applying for new jobs.

Weekly Reader was distributed to elementary and middle school classrooms every Friday afternoon in the form of a magazine, with articles about current events catering to different age groups. In its heyday, from the 1970s to early 1990s, the publication reached millions of students nationwide, offered at an annual rate on the cheap.

Its main competitors were Time for Kids, and Scholastic News, the industry leader that publishes 28 titles, reaches 30 million students, according to its website, and also dates back to the early 20th century. At the time of the purchase, Weekly Reader had been on the market for “a little while,” after years of declining circulation and changes to its corporate structure, Roome said. Scholastic had no intention of consolidating Weekly Reader but wanted to see how its brand and content fit in with Scholastic’s, Roome said. 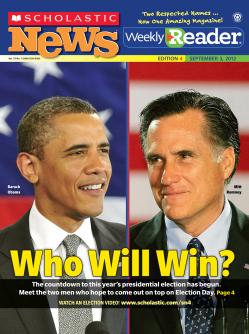 But Neal Goff, a former president of Weekly Reader who worked there from 2004 to 2010, said Scholastic’s main interest was in Weekly Reader’s subscriber information, and even pushed for more subscribers after it knew the print product would be discontinued.

“They bought a competitor and essentially put it out of business,” Goff said in a phone interview.

“They reduced the field from three competitors down to two.”
The decision to consolidate Weekly Reader came recently, Roome said, and was based on content.

“Weekly Reader has been in a steep decline,” he said. “The idea that it’s suddenly going to be a hockey stick uptick that we will exploit is ridiculous.”

“We thought we could take the best of what they do and best of what we do and put it together with what we publish,” Roome said in a phone interview.

A new website will offer interactive features based on the content in the publication. As of Wednesday evening, the Weekly Reader website featured a Post-it note that reads “We will be back soon,” with a countdown and a note promising online content yet to come. 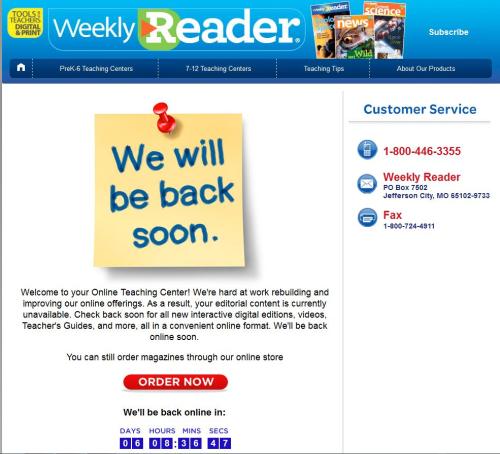 While many news outlets wrote off Weekly Reader‘s decline as another casualty of the demand for digital media, those in the publishing industry said it was more complicated.

In 1999, Ripplewood Holdings, a private-equity firm based in New York City, purchased Weekly Reader Corp. and supplemental educational properties for $415 million. It had been owned by Primedia Inc., a media company that, at the time, also owned Channel One News, the student-centric broadcast television news network that emerged as another competitor for classroom magazines.

Circulation dipped to around 6.5 million in the late 1990s and early 2000s as more competitors entered the market, but Goff said the publication’s problems didn’t arise until 2007, when Ripplewood merged the company with Reader’s Digest, the general-interest magazine company it had recently purchased for $1.6 billion. By 2009, Reader’s Digest went bankrupt, Weekly Reader became “starved for resources,” Goff said, and circulation plummeted. Goff said the company moved toward online editions and digital subscriptions relatively early and that profit margins remained positive, though stagnant, in the past decade.

“We had a strategy we thought could migrate the business from print to digital,” Goff said. “But we didn’t have the resources or corporate backing to make that possible.” Neither Weekly Reader nor Scholastic News sell advertisements.

(Ripplewood representatives did not respond to requests for comment.)

The adoption of the No Child Left Behind Act also contributed to the publication’s decline, Goff said, because schools had less time and interest in social studies, in lieu of a focus on math and reading scores. Weekly Reader tried to position itself as a literacy tool, but didn’t gain much traction.

Regardless of Weekly Reader‘s troubles, Scholastic’s classroom magazines seem to have avoided some of those pitfalls. While it doesn’t bring in nearly the sales as its children’s publishing division, which accounted for $1.1 billion of the company’s $2.1 billion in revenue last year, the company’s classroom and supplemental materials division saw increases in revenue ($197 million to $208 million), operating income, and operating margin last year. (Scholastic publishes the Harry Potter series as well as the Hunger Games trilogy.)

Roome, of Scholastic, is adamant that the Weekly Reader isn’t gone for good—it’s just coming in a different package. But social networks were filled with tributes to the classroom staple.

Charlene Gaynor, the chief executive officer of the Association of Education Publishers, hopes only the printed version is on its way out and not the concept.

“It was a way of using real current events and nonfiction texts to help both teach kids how to read and help engage them in social studies,” she said. “It was very much ahead of its time.”