The RFP process in K-12 is often more complex than in other public sectors, but school districts typically award contracts more quickly, according to a new analysis of requests for proposals.

The “State of the RFP 2019” report from e-procurement company Bonfire examined data from over 6,000 RFP submissions at 278 public sector organizations, including those in K-12, higher education, healthcare, and municipalities.

How can ed-tech companies work with school districts, to make sure that usage of a product is strong and K-12 systems are getting what they’re paying for? Many analyses have shown that district ed-tech usage rates are weak. EdWeek Market Brief will dive into the usage disconnect in a Nov. 22 webinar. You can sign up here.

While K-12 RFPs typically contain more pages than RFPs in the other sectors and have more vendors bidding, the process actually goes more quickly from posting of the notice to award, the report found. That might come as a surprise to companies trying to sell in the K-12 space, who often complain that the public bidding process is slow, cumbersome, and counterproductive.

The report primarily looked at school districts with enrollments between 10,000 and 49,999 students.

“K-12 tends to be punching above its weight,” said Corry Flatt, CEO and co-founder of Bonfire in an interview. “K-12 procurement teams tend to run faster projects, but their [RFPs] are actually above the average in complexity.”

The report found that K-12 districts:

The K-12 RFP process also includes fewer bid evaluators (2 compared to an average of 3 for the public sectors studied), which may streamline the process, he said. Notably, K-12 procurement teams tend to be smaller than in other sectors. 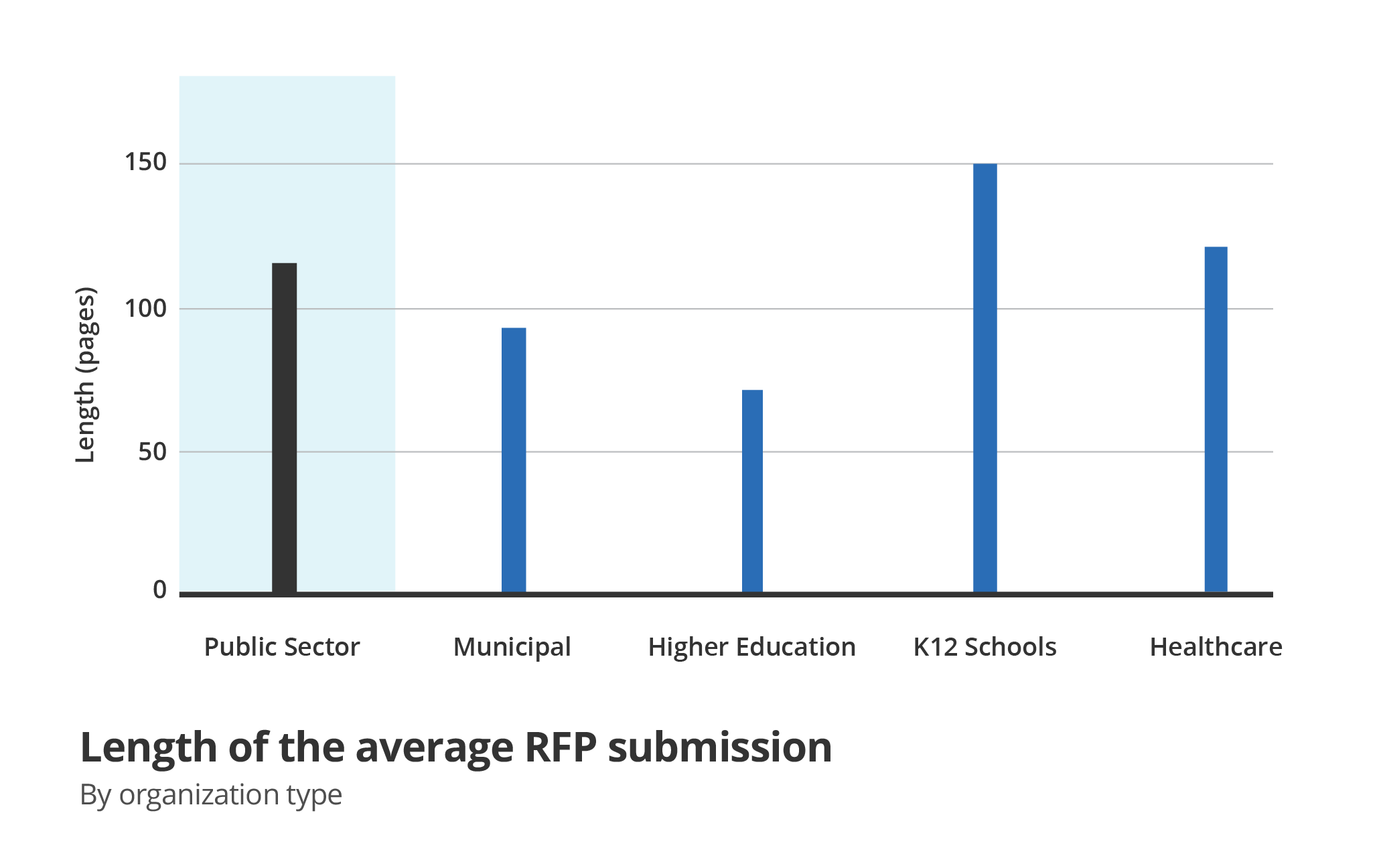 “For the equivalent size of spend, they have fewer resources, but they still manage to conduct faster processes dealing with more data,” Flatt said.

Across the public sectors examined, the report found that fewer than half of vendors who view RFP documents make a submission, a “troubling statistic,” the report notes. This could indicate that some RFP specifications are expensive to respond to and possibly rigid, with some vendors opting to avoid the expense of response.

But the fact that K-12 districts had the longest RFP page-count of all the public sectors studied, doesn’t necessarily mean those RFPs are deterring vendors from bidding, Flatt said.

School districts may have longer RFP documents because they must lay out boilerplate rules and regulations. He also noted that K-12 districts appear to be more specific about their requirements and do a better job of defining what they want to buy.

In response, vendors bidding on K-12 RFPs also had the longest average proposal length of the public sectors examined in the report. “If you’re being very explicit about your requirements, you’re going to get very specific answers,” Flatt said. Vendors “are going to take pains to address the points that you’ve asked them to address.”

But vendors should keep in mind that sometimes being more concise is a better strategy, Flatt said, particularly because the K-12 education market is more competitive than other public sectors. K-12 RFPs had an average of six bidders per RFP, while higher education institutions average three, and healthcare averages four.

Price remains an important consideration. An EdWeek Market Brief survey of district leaders from earlier this year found they are looking for clarity and  transparency around pricing and want to know information about pricing early in the sales process. And while procurement plays a crucial role in K-12, not everyone in a district understands how it works.

Of those three categories, IT RFPs take the longest from posting to award and have the most evaluators, which is a concern because technology changes rapidly—half the requirements in an IT RFP will be invalid six months in the future, the report notes. So if the RFP process takes up too much time, vendors may struggle to meet new requirements upon implementation.

The report suggests that vendors replying to IT RFPs be specific about the problem that is trying to be solved rather than the granular details of the technology used to solve the problem.

“IT procurement is getting more and more complex,” Flatt said. This presents a further challenge for K-12 districts because their IT departments may not be on the cutting edge.

4 thoughts on “Many Companies Hate Responding to K-12 RFPs. It May Not Be as Bad as They Think”