What a difference a definition makes.

A coalition of 22 organizations is opposing the reclassification of about 1,500 schools and libraries that have been considered “rural” into a category called “urban clusters” under changes to the Federal Communication Commission’s E-rate program—changes that will go into effect in the 2015-16 school year.

An urban cluster, according to the U.S. Census Bureau, has 2,500 to 50,000 residents. This definition puts it squarely between a rural area and an urban one.

The letter’s co-signers include the AASA, The School Superintendents Association; the American Library Association; the Consortium for School Networking; the National PTA; and both major teachers’ unions. They urged the FCC to reconsider its adoption of the U.S. Census Bureau’s definition of rural and urban in determining whether an E-rate applicant qualifies for an additional rural discount. Previously, the FCC had proposed using the definition of rural set out by the National Center for Education Statistics, which uses locale codes.

“We are concerned that the FCC has adopted a specific definition of rural that will come with unintended consequences,” the letter’s co-signers wrote. Citing the “unique obstacles and opportunities that rural communities face,” the organizations urged the FCC to modify the definition of rural and urban clusters as used in the E-rate program.

What’s at stake is thousands of dollars for some schools. The following “discount matrix” from the Universal Service Administrative Company, which administers the E-rate program, shows which schools qualify for an extra discount: 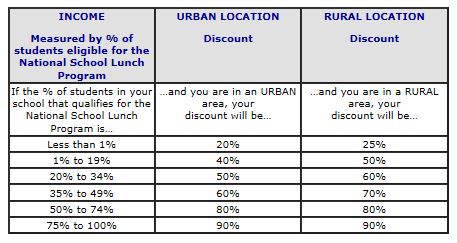 In the federal government, “rural is defined seven different ways to Sunday, depending upon the agency,” said Noelle Ellerson, associate executive director for policy and advocacy at AASA, whose organization took a leadership role in rallying supporters and writing the letter. The coalition proposed that a population threshold of 25,000 or greater be considered urban.

The E-rate program provides a maximum of $2.4 billion in discounts annually to schools and libraries for advanced, affordable telecommunications services, Internet access and internal connections. In July, the FCC issued an order to reform the E-rate for the first time in 18 years, a move that will channel more funding into high-speed broadband and other technologies that can provide fast and reliable Web connectivity. At the same time, the FCC is phasing out financial support for various types of phone and “legacy” services that it says are outmoded.

In its voluminous 176-page report and order of proposed rulemaking, the FCC changed the way “rural” would be defined, and with that shift came the issue that would reduce the extra money available to schools and libraries that now will be classified as part of “urban clusters” if they are in communities with 2,500 to 50,000 residents.

The letter the coalition submitted to the FCC on Monday was in response to a motion to reconsider that was filed with the FCC on Sept. 24 by the State E-Rate Coordinators Alliance, the National Telephone Cooperative Association-The Rural Broadband Association, and the Utah Education Networks.

“While this motion is separate from the other order, to raise the E-rate cap, we’re hoping it will be lumped into the Nov. 21 FCC meeting,” said Ellerson.