Sales of mobile personal computers in the U.S. K-12 market have surged by 18 percent over the last year, in sharp contrast to the international space, where the appetite for devices in education has fallen off considerably.

New data from Futuresource Consulting finds that 12.6 million mobile PC units were sold into the American education sector in 2016, up from 10.7 million the year before. But non-U.S. sales went in the opposite direction, falling by 26 percent, partly because of governments dialing down plans for big ed-tech investments, the analysis found.

Futuresource Consulting attributes the spike in U.S. sales to continued interest among U.S. school districts in 1:1 computing programs—despite some K-12 systems’ relatively newfound caution in making ambitious purchases—as well as a reliable churn in the buying of replacements for existing devices.

The forecast for sales in 2017 is also positive, with the growth in shipments likely to remain in “double figures,” the U.K.-based consulting organization predicts.

When it comes to sales of operating systems, specifically, Chromebooks continue to build on their position of strength in the U.S. market, the analysis finds. Chromebooks have 58 percent of market share in K-12, an increase from 50 percent in 2015. (See Education Week’s past coverage of Chromebooks’ swelling popularity in districts, attributed in part to their affordability and simplicity.)

The breakdown of the market share for operating systems in the United States is below: 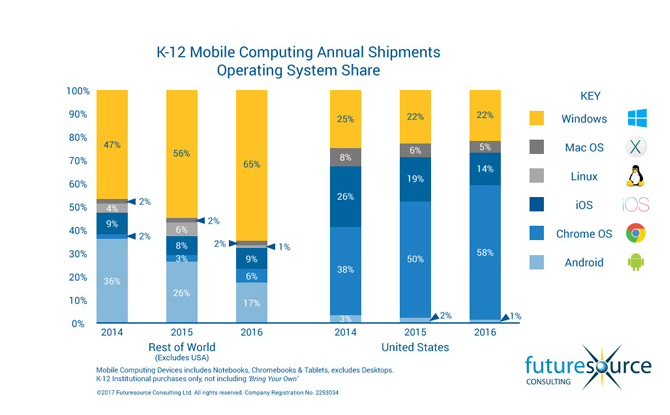 (A note on the report’s methodology: Futuresource Consulting says its data is meant to capture the number of device shipments at a certain point in time. It does not offer a picture of which provider has the most operating systems currently running in K-12 classrooms. Futuresource’s data is culled from a “long and forensic primary research program” that involves interviews with vendors—channel providers, government departments, and others in the industry—explained Mike Fisher, the associate director of education at Futuresource Consulting, in an e-mail to Marketplace K-12.)

Futuresource says that while Apple and Microsoft have taken a hit because of Chromebooks’ gains, both companies are making moves that could help them re-gain ground.

Microsoft, for instance, has rolled out the launch of different products, including Microsoft Classroom and School Data Sync; and it is selling devices with Windows 10 for below $300—in some cases as low as $189—designed to rival Chromebooks, Futuresource says. It has also announced “InTune” for Education, a tool that resembles Google’s management console. Apple, meanwhile has unveiled the “Classroom” app and updates to the functionality of iOS 9.3, including the ability to share iPads, noted Futuresource. (Microsoft is the dominant player in selling operating systems in many international markets, Futuresource says, though Chromebooks have made gains in some regions, such as northern Europe.)

The overall global market, meanwhile, has seen a big decline in mobile PC sales over the past year, according to Futuresource. In the non-U.S. market, 13.6 million units were shipped in 2016—a 26 percent decline over the past year.

The biggest factor in that drop-off was the absence of big national ed-tech projects in 2016. That was especially true in markets such as Latin America, where there have been major tech investments in K-12 in recent years, but where economic conditions have soured, Futuresource points out.

The buying of ed-tech in international markets “often depends on the market structure and where funding is coming from,” Fisher said in his e-mail. “We have basically seen a drop off in emerging markets,” where money for devices is “typically funded nationally.”

Other markets for mobile PCs remain strong, including China, the company said. And Futuresource Consulting’s prediction is that the market will rebound in 2017, with shipments reaching 15.8 million globally.

A number of emerging markets continue to have a strong appetite for ed-tech, Fisher added, including many countries in Africa, which, following the lead of Kenya, are developing national education plans that could bolster the need for digital tools.