The number of mergers and acquisitions across the education industry climbed by 9 percent over the most recent year, with private-equity deals driving much of that growth.

There were 428 deals in 2018, up from 392 the year before, and the total value of the transactions was $15.5 billion, according to a new analysis released by Berkery Noyes, an investment bank that in addition to education, focuses on the information, software, marketing and tech sectors. 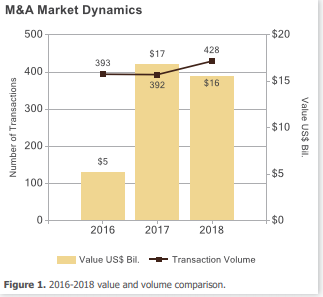 The dollar value of the deals actually fell from $16.8 billion in 2017, but that’s partly because the amount of money had tripled from the previous year, 2016.

The growth in the total number of transactions across education was fueled by a surge of private equity activity, with the number of financial deals in that area rising from 115 to 144.

The jump in private equity deals was a “notable increase,” said James Berkery, managing partner at Berkery Notes, in a statement to EdWeek Market Brief.

Private equity in the education space had remained nearly constant during the previous three years, he explained.

Many of the biggest education-focused deals in  2018 were not directly related to K-12 classroom activity, but rather workforce training, publishing and other areas, according to Berkery Noyes’ breakout of the top 10 transactions.

But the largest deal on the books in 2018 was focused on education–in the international market. The top deal was Brazil’s giant for-profit education company, Kroton Educacional S.A., snapping up another Brazilian education company, SOMOS Educação, S.A., for $1.7 billion in U.S. dollars.

Where are education investors making their bets in 2019? Tune in for EdWeek Market Brief’s webinar on Feb. 22 to find out. Our presenters include Jennifer Carolan and Jen Wu of Reach Capital and Amit Patel of Owl Ventures. They’ll take about trends they see, and what’s on the horizon.

Kroton has expanded its footprint through a series of acquisitions over the past few years. The company says it currently operates 133 college campuses across 20 states in Brazil, and more than 1,300 distance-learning centers accredited by the country’s ministry of education.

It also operates 687 primary and secondary schools across Latin America’s most populous nation.

Other top deals on the list included Platinum Equity LLC acquiring Jostens, a company that provides yearbooks, other publications, and an array of consumer goods to schools.

The top nine deals across the education industry accounted for 52 percent of the total value of mergers and acquisitions in the sector, according to Berkery Noyes.