The number of mergers and acquisitions in the education industry climbed during the first half of the year, as did the multi-billion dollar value of those transactions, according to a new report.

The biggest deal during that period was the acquisition of SkillSoft, an Irish company that provides cloud-based technology services to governments, businesses, and schools, by Charterhouse Capital Partners, for $2.3 billion, according to Berkery Noyes, the independent investment bank that published the report.

The second-biggest transaction involved a company that’s probably more familiar to Education Week readers—Renaissance Learning, bought by Hellman & Friedman, LLC, a private-equity firm, for $1.1 billion. See my colleague Michele Molnar’s story from earlier this year examining that deal, one of the biggest in the history of the U.S. ed-tech industry.

Overall, the total number transactions in the first half of 2014 rose to 160, from 147 a year earlier, and the total value of the transactions jumped from about $4 billion to $5.9 billion.

While the vast majority of deals, about 70 percent of them, were “strategic” transactions, generally looking to expand in a new or familiar market, or diversify, the number of those transactions dropped from a year ago, from 118 to 108.

The number of financial transactions, on the other hand—often defined as deals by parties seeking returns—jumped from 29 to 52 during that same period. 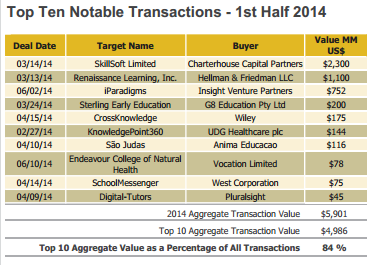