Microsoft recently unveiled its Surface Pro 3, which it dubs “the tablet that can replace your laptop,” with an interest in tapping the education market, where tablets and laptops are increasingly popular—and where Apple’s iPad is dominant.

The Surface Pro 3 has a 12-inch screen the size of a legal pad, a 9-hour battery life, and a Windows 8.1 operating system.

With an entry level price of $799 for the tablet part of the technology, it costs another $130 to add the keypad, which Microsoft calls its “Type Cover.”

“This will be the 12th year we’ve rolled out a tablet/PC,” said Baker, whose 900-student preK-12 private school in Cincinnati, Ohio has been a “1-to-1” computing educational community since 1996, with each fifth through 12th grade student receiving a device. 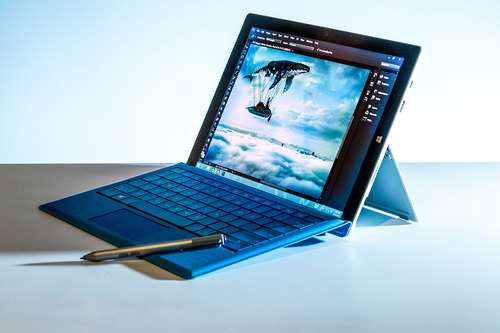 Although Baker passed on earlier versions of the Surface Pro for his student population, he is an avid supporter of the latest Microsoft offering, which comes with The Surface Pen, a “smart pen” that provides the best digitized “ink-on-paper” simulated experience of any stylus he has used.

“The reason we went for this device, and didn’t go with the Surface Pro before, is that I need a big screen, an active digitizer pen, an all-day battery and a great keyboard for when you’re writing the great American novel,” said Baker, who also teaches art to middle school students.

Recently, federal officials told Education Week they plan to lease the Surface Pro 2 from a private contractor to give the National Assessment of Educational Progress, one of the most highly regarded gauges of student achievement. The tablets would be distributed to participating schools for the exam, then collected afterward. The price for the Surface Pro 2 devices is $899, according to Microsoft’s website.

Microsoft could face an uphill climb, given Apple’s dominance of the market, the crowded nature of the marketplace, and recent, high-profile bad news surrounding big district tech adoptions.

Microsoft is aiming its new laptop “replacement” at Apple’s MacBook Air laptop and iPad tablet. The latter has been the dominant device in the education tablet market.

CORRECTED: A Surface Pen is included in the purchase price of the device.