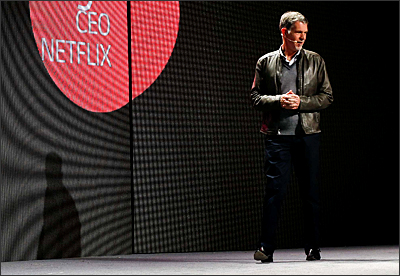 Netflix CEO Reed Hastings sees an “incredible tailwind” ahead for the education technology industry, a boom he predicts will be driven by increases in cloud computing and overall digital access, among other factors.

Hastings’ basic message to company officials and entrepreneurs here at the ASU/GSV Education Innovation Summit seemed to be to persist—through “fantastically byzantine” school procurement procedures, uneven school and district access to the Web, and other barriers.

The company official compared many ed-tech companies’ struggles to find markets to the ups and downs of Netflix itself, which have included competition from all sides and massive stock drops.

“When you get the crap kicked out of you when you’re down, it’s relentless,” he said. But his company stuck it out, he said, and is now reaping the benefits.

“You don’t want to enter the market when everyone else is piling in,” Hastings said, speaking of ed-tech. “You want to enter when it’s difficult.”

But Hastings also blamed another, specific culprit that he argued is stifling innovation in districts: elected school boards, which he said make it difficult to create and sustain support for bold but politically difficult policies in school systems, particularly large urban ones. The priorities of those boards end up shifting from election to election, and, as a result, districts fail to develop and stick to a consistent vision—as is more likely to occur on the boards of nonprofits and for-profit companies, where new members tend to share former members’ priorities and understanding of the organization, he argued.

When new district leaders announce new directions, “we keep mistaking these oscillations for progress,” said Hastings, a former president of the California state board of education.

Hastings suggested that the Los Angeles Unified School District’s recent large-scale purchase of iPads had been shaped by those same, ever-shifting political forces. It was an inefficient way to make a technology purchase, he said, but was “symbolic” of districts’ attempts to make big, bold steps without thinking them through.

For tech entrepreneurs, a more fertile market than traditional districts exists in charter schools, Hastings said, because of their autonomy and willingness to experiment. He urged the ASU/GSV attendees to aggressively pursue work in charters. (Hastings is a board member of the KIPP charter network.)

“The growth of charter schools is creating a new, dynamic edge in school districts,” he said. “Charter schools are very tech-friendly. They’re like all of you—they’re creative organizations; they’re always looking at what they can do better.”