For school districts, bond measures are cash infusions that give them the money to pay for big projects in construction, technology, and other areas that they couldn’t otherwise afford through normal budget channels.

For companies trying to win business from schools, bond measures are potential treasure chests—loaded with newfound opportunities to score sales and win contracts from K-12 systems that suddenly have millions more dollars to spend.

So what if vendors—in education technology, construction, and other areas&mash;had targeted, useful intelligence on which school districts had received or were seeking cash infusions from bond measures?

That’s the idea behind SchoolBondFinder, a Web-based platform launched recently by the Amos Group, a consulting company. The creators of the site are touting it as the first “comprehensive, interactive database” for companies keen on getting a leg up in finding newly approved or prospective capital improvement projects in K-12 districts around the country. 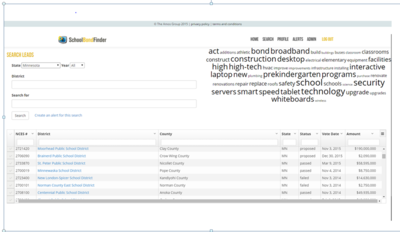 Created by the Amos Group, a Minneapolis-based consulting company, the online platform launched three months ago allows users to search through and sort capital projects, and receive notifications of newly approved or potential big spending measures in areas aligned with their business interests.

One of SchoolBondFinders’s partners is Paula Love, who has advised on securing grants for nonprofit and for-profit organizations. Love, sometimes called “the funding doctor,” is providing the service with analysis, and other insights, SchoolBondFinder officials say.

Chuck Amos, the CEO of the Amos Group, said that while bonds for K-12 can be used for a wide variety of expensive, capital projects, he expects that many of the users of SchoolBondFinder will focus on ed-tech—including 1-to-1 technology, or other ambitious purchases of digital tools and systems across big student populations.

The site allows digital vendors to be “much more strategic in finding information,” Amos explained. “Ed-tech companies have been very receptive so far.”

A team of people at SchoolBondFinder search for information on new and existing bonds through a variety of means. They have tools that allow for scraping the Web for that information and analyzing it, though the searches also depend on a lot of “elbow grease,” as Amos said. There’s also a “pretty robust editorial process,” to ensure that useful information on bonds is being collected, and useless data are tossed out, he added.

Over time, Amos said, it’s possible that SchoolBondFinder could provide a targeted service to top administrators in K-12 systems who are interested in keeping track of bond projects in other communities, in order to inform their own decisions about when to push for new borrowing measures.

It’s worth noting that some school districts’ big investments in educational technology have been plagued with problems almost from the get-go, prompting questions about the practicality of massive purchases of tools such as tablets and district officials’ ability to implement them.

And while some districts, most notably the Los Angeles Unified school district, have taken out bonds to pay for technology, others question whether taking out long-term bonds to pay for large-scale school technology makes sense at all, given the relatively short lifespans of those tech products, and other potential stumbling blocks. (See my colleague Michelle Davis’ recent story exploring questions about the wisdom of using bonds to pay for K-12 technology.)

Amos has held several roles in the ed-tech world. He formerly served as the CEO of Atomic Learning, a provider of Web-based software training, and he now serves as chief executive of GuideK12,  which provides geovisual analytics for education. He’s also worked as a consultant to emerging ed-tech providers.

Image: a screenshot SchoolBondFinder’s searchable system, provided by the company.