Many companies trying to find a market in K-12 schools face a question that fills them with anxiety, if not outright dread: How much technology can teachers handle?

That question can prove critical to whether an ed-tech provider will succeed or fail.

If technology is seamless and easy for educators to manage, it can clear the path for a digital provider. If it overwhelms them, the odds for companies’ get much longer, right out of the gate.

A new survey conducted by the Education Week Research Center offers ed-tech providers insight on how educators think about technology and its uses in classrooms. The results will probably prove both encouraging and dismaying to companies.

First, the uplifting news: A majority of K-12 educators responding to the survey, published in this year’s special report Technology Counts, see themselves as willing to take chances on classroom technology. Twenty-four percent describe themselves as risk-takers, and 47 percent see themselves as early-adopters when it comes to using technology.

That’s a finding that contrasts with some of the stereotypes of educators–that they’re instinctively resistant to trying out new digital tools.

Many teachers also see themselves as important decisionmakers when it comes to  what technology ends up getting used in their classrooms. 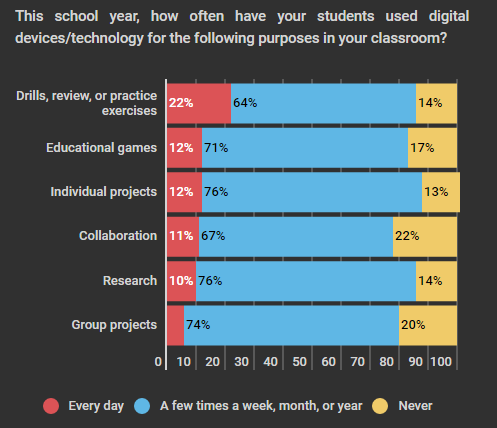 Fifty-one percent of respondents said they, personally, are very influential in selecting the technology that gets used. Twenty-seven percent of the educators surveyed said teachers in their building are.

But how are teachers actually using technology? Research shows that one of the biggest problems with educators’ experiences with tech is that they encourage students to use it for relatively simple or rote tasks, rather than in challenging or daring ways.

On that front, the survey results are not as positive. The biggest portion of respondents, 88 percent, said they tend to have students use technology for drills, reviews, or practice exercises, at least a few times a week, if not every day. Smaller percentages used it for group projects or collaboration. (See the table, above.)

The survey was conducted online in April, with participation from about 700 classroom teachers and school-based instructional specialists who are users of edweek.org. The survey also revealed persistent, and familiar, barriers for educators in using technology.

Asked to identify their biggest challenges, the largest portion of educators, 42 percent, cited a lack of digital devices as a very significant problem; 33 percent said lack of training was the top problem.

Slow or unreliable internet access was also a problem, with 28 percent, citing it as a very significant barrier. (Over the past few years poor web connectivity in schools has become an increasing focus of policymakers, including the Federal Communications Commission, which has channeled billions in new funding through the E-rate program to try to expand and speed up online access.)

Meanwhile, fewer educators, 20 percent, said lack of guidance from school administrators was a significant  problem, and just 17 percent said classroom management of technology was a big hurdle for them.

So education companies selling to schools, and in particular, vendors counting on classroom educators to embrace their technology, need to recognize a couple things.

The first is that they’re selling to a confident group of users—though the reality is that educators may need plenty of support knowing how to use technology effectively. Educators are also worried that they lack the basic technology, and the training, to get their ambitions off the ground. Companies that can figure out ways to navigate those obstacles can improve their chances of getting their products into districts.