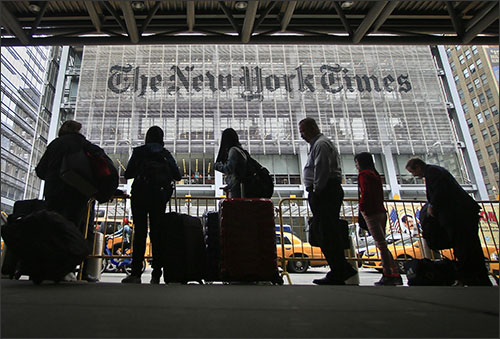 The New York Times media conglomerate is entering the education market with the help of CIG Education Group, a New York-based investment firm.

“NYT EDUcation,” the name of the education initiative announced Wednesday, will offer courses and programs for high school and higher education students, as well as continuing and executive education for adults, the two organizations indicated in a release.

The commercial venture intends to capitalize on the Times’ reputation for maintaining a “high quality standard” for everything it publishes, said Michael K. Chung, CEO of CIG Education Group, in a phone interview. “It’s that level of scrutiny and quality control we want to have in their educational offering.”

Initial offerings—online instruction, face-to-face teaching, and a hybrid model—will make enrollees eligible for certificates at all levels, for now. Chung said NYT EDUcation, as it evolves, will pursue accreditation from an accrediting body. Course subjects will vary, but early offerings for high school students preparing for college are likely to focus on the Times’ strengths in the areas of writing, media and communications, he said. The courses will be offered for enrichment, rather than for academic credit at this point, he said.

CIG was chosen by Times’ management because of its track record with Sotheby’s Institute of Art, which the investment firm developed into a graduate-level study of art and its international markets, and because “of the people we think they can bring to the table,” said Michael S. Greenspon, general manager of the Times‘ news services and international, in a phone interview.

Education is at the core of the Times’ work, according to Greenspon. “We think of ourselves as educators not in a teaching sense, but almost as an educational institution,” he said. “And our content has been used by educators for an extremely long time.”

Journalists and other Times’ staffers might be guest lecturers in NYT EDUcation, but they will not be designated instructors, Greenspon said. “Just becuase someone is a brilliant journalist, does not mean they are going to be a great educator,” he added. Chung said the initiative might tap the expertise of retired Times’ journalists.

All content from The New York Times will be available to the new education initiative, but NYT EDUcation courses will not rely exclusively on Times materials, according to Greenspon.

As for approaching high schools with a curriculum, it’s too early to make that call, according to Chung. “Selling to the high schools is a much, much longer cycle…Right now we will start with some individual courses, then let the market tell us where to take those courses,” he said.

Asked whether the high-school level courses would be offered in a “massive open online course” or MOOC format, Chung responded: “This is a commercial venture, so it needs to be supported by revenues. But at the same time we can’t ignore platforms like the MOOC, what Coursera is doing with Google and Instagram, and some other interesting partnerships.”

This is not the first media company to venture into the education realm. The Washington Post‘s purchase of Kaplan, a provider of college courses, test preparation and professional training services, in 1984 represented another pairing of education and media. By 2007, the Post’s then-owner Donald E. Graham dubbed his business “an education and media company” at a meeting with Wall Street executives. However, the Post was sold in 2013 to Jeff Bezos, founder and CEO of Amazon.com, and Graham’s company—now named Graham Holdings Co.—kept Kaplan. Last year, Kaplan, was #614 on the Fortune magazine list of top 1,000 public and closely held private companies last year.

Chung said his company sees opportunity to compete with some colleges that are being disrupted today in the marketplace by competition for students based on the cost of tuition, declining enrollments, and the need of traditional institutions to maintain facilities when more education is moving online. CIG’s hypothesis is that a corporate-branded educational offering, bearing the New York Times‘ name, could be fashioned to “not only compete with the other offerings out there, but could stand out.”

To the Times, this is “an important milestone” in its strategy to extend the brand, Greenspon indicated in the official release. The affiliation with CIG Education will “highlight the history, depth and breadth of The New York Times,” he said.

Photo: Pedestrians wait for cabs across the street from The New York Times in 2014 (AP File)