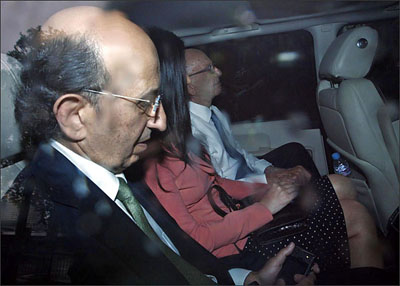 Media conglomerate News Corporation announced today that it will split into two separate companies, including one that will house its newspaper, publishing, and education businesses.

The split would also create a separate media and entertainment company that includes many of News Corp.’s more-profitable businesses, including its Fox TV networks, Twentieth Century Fox film studio, and international media organizations. The smaller news and publishing division would include assets like The Wall Street Journal, HarperCollins book publishing, and its new education division. Both companies would be publicly traded.

The official announcement says “News Corporation’s Board authorized management to explore this separation after a Board meeting yesterday.” The impetus for the move is to “simplify operations and greater align strategic priorities,” the announcement says. News Corp. chief executive Rupert Murdoch would serve as chairman of both companies and CEO of the entertainment company. It is not disclosed who would lead the publishing company. The process is expected to take about a year.

In fiscal year 2011, News Corp’s entertainment business generated $23.5 billion in revenue, compared to just $8.8 billion for its publishing business, though the latter business is still profitable.

Despite the fanfare that surrounded its creation and the big-name hires, like former New York City schools chancellor Joel Klein, that came with it, News Corp.’s education division has stalled. Its only major asset is the education software company Wireless Generation, purchased in late 2010.

It’s been speculated that part of that stall is due to Joel Klein’s involvement in cleaning up the phone-hacking scandal that engulfed News Corp.’s newspaper division. While the ramifications of that scandal are far-reaching and ongoing, the company announced earlier this month Klein would refocus all of his attention on education. It remains to be seen whether the publishing company would bear the ongoing burden of legal responsibilities regarding the phone-hacking scandal, and whether that would have any effect on the new company.

“Wireless Generation is excited about a future that will put an even brighter spotlight on education innovation,” said Joan Lebow, a Wireless Generation spokeswoman, in an email. “We see continued growth opportunities that will bring more top quality digital tools to educators nationwide.”

The split could give the education business a chance to shine brighter within a smaller company, as compared to a massive one like News Corp. As it currently stands, Wireless Generation is mentioned sparingly in News Corp.’s annual earnings report for 2011 and is grouped under its “Other” business.

The resulting publishing business could be seen as an indirect competitor to companies like Pearson and McGraw-Hill, which also include education technology, news, and publishing assets. News Corp.’s new publishing company would be similar in size to McGraw-Hill, though that company is likely to spin off its own education division later this year.

(Wireless Generation’s co-founder and executive chairman, Larry Berger, serves on the board of trustees of Editorial Projects in Education, the nonprofit corporation that publishes Education Week.)

One thought on “News Corp. to Split, Join Education Business with Publishing”