North America is dominating the school furniture market, with 52 percent of market share in 2018, according to the summary of a report released this month by research firm Grand View Research.

The global school furniture market was valued at $4.2 billion in 2018 and is expected to grow through 2025, according to the report.

A rising focus on the educational sector in rural and urban areas, as well as governments’ move to compulsory basic education around the world, are factors in the school furniture market’s expansion, the summary noted.

The presence of leading manufacturers in the U.S., including Artco-Bell Corp., Bretford Manufacturing, Inc., Fleetwood Group, Scholar Craft, VS America, Inc., Smith System Manufacturing Co., and Knoll, Inc., has helped accommodate the growing demand for school furniture in North America, according to the summary.

Another factor fueling changes in school furniture choices in the U.S. is the adoption of mobile technology in classrooms that allows for different seating arrangements, according to reporting in EdWeek Market Brief.

From 2019 to 2025, the Asia Pacific region is expected to post the fastest compound annual growth rate—7.1 percent—of all worldwide regions, the summary states. 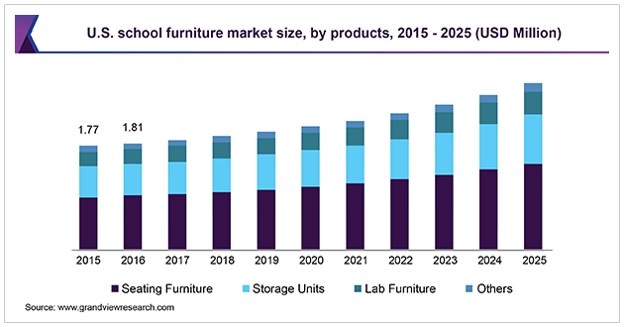 There has been a growing trend in developing countries of opting for private education, which is expected to drive demand for school furniture, the summary states.

For 2015-2016, there were about 133,000 U.S. public K-12 schools, and about 5.1 million Canadian students enrolled in public elementary and secondary schools, the summary stated, citing statistics provided by the National Center for Education Statistics and Statistics Canada, respectively.

Companies are using social media as a key tool to advertise flexible school furniture, and drawing increased resources from educators who seek crowdfunding to explore new aspects of the school furniture business, with a rising emphasis on flexible furniture, the summary states, citing a June 2019 NBC News article noting there were approximately 81,000 #flexibleseating Instagram posts.

Manufacturers are using new and more sustainable and durable raw materials for furniture production, including molded plastic, processed or engineered wood, and high-pressure laminate to make tables, chairs, and benches for schools and classrooms, the summary states.

For the report, Grand View collected and organized a broad range of raw market data from supply chain actors including raw material suppliers, distributors, and buyers.

The firm also mined data from a trove of reports in its repository and several paid databases, and continuously filtered the data to ensure consideration was limited to only validated and authenticated sources.

“Increasing innovation in raw materials for production of classroom furniture has resulted in greater attention toward collaborations, reconfigurations, and ergonomically derived furniture for classrooms,” according to the summary. “Increasing student enrollment in schools across the globe has upped the need for chairs and tables in classrooms.”

The Grand View report can be accessed here.