The fate of “Obamacare,” and millions of Americans’ access to government-subsidized health care, once again rests with the U.S. Supreme Court—and possibly with Chief Justice John Roberts, if the speculative vote-counting is correct. But what impact would a ruling, which could come next year, have on K-12 schools?

Lawyers who have been following the case and the issues at stake see several possibilities in play, which would likely turn on the precise language of the court’s ruling.

The case, King v. Burwell, has some clear parallels to a separate legal challenge to Obamacare, filed in federal court in Indiana and brought by a group of plaintiffs who include the state’s attorney general and a group of school districts.

But those two cases aren’t focused on identical issues. And regardless, predicting how a ruling by the Roberts court in the King case would affect K-12 systems is difficult because it would depend on how narrow or broad the decision is.

For those who haven’t been following the case closely, here’s a quick recap of the issue at hand:

Obamacare gives consumers access to subsidized health insurance through exchanges established by their states, or by the federal government. But more than two-thirds of states, 36, chose not to do so, a decision driven mostly by Republican state officials opposed to the law. Uninsured residents of those states were instead able to rely on a federal exchange to provide them with subsidized coverage.

Many backers of the Affordable Care Act retort that this is all bunk—and that the legal challenge is a political gambit based on what amounts to a “drafting error” in the law. They say Congress clearly intended users of the federal exchange to be eligible for subsidies. After all, they say, the law was created to give the uninsured access to affordable insurance, and subsidies—whether provided through a state or federal exchange—are essential to accomplishing that goal.

For school districts, and other employers, the law mandates that if they have at least 50 workers, they must provide health insurance to full-time employees, meaning those who work an average of at least 30 hours a week, or pay fines.

The Indiana lawsuit also challenges the federal subsidies. But it also makes a related argument that because those individuals don’t quality for subsidies, employers, including school districts, in states without exchanges—cannot be penalized for not offering full-time workers health insurance, the so-called “employer mandate” under the law.

But let’s focus on the King case. If the Supreme Court sides with the plaintiffs, here are some implications:

The plaintiffs in the Indiana case, meanwhile, argue that the Affordable Care Act is forcing school districts to choose between absorbing big costs in health care and cutting employees’ work schedules to keep them below the 30-hour threshold for full-time employees. (In February, the Internal Revenue Service published rules that eased the employer mandate rules, easing deadlines on medium-and large employers, including districts.) 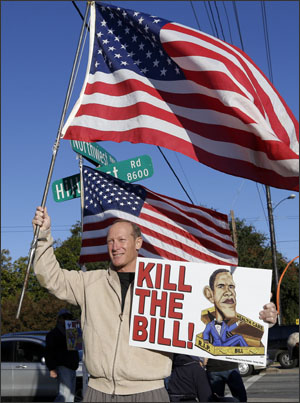 If the Supreme Court strikes down the subsidies in the King case, then it’s likely that there’s no penalty for employers—and thus no incentive for them to provide health insurance, Relland said.

Jim Hamilton, a lawyer representing districts in the Indiana case, said that if the subsidies are struck down, then the employer penalties affecting districts and others “should fall as well.”

Yet because the King case is focused on subsidies, not the employer mandate, it’s hard to know whether the high court will weigh in directly on employers’ obligations, Hamilton added.

Hamilton said it’s possible that the Supreme Court case could have a direct impact on the Indiana case—which is now pending before the U.S. District Court for the Southern District of Indiana—without resolving it entirely.

He also noted that the Indiana case also challenges the Affordable Care Act on other grounds that the King case does not: It says it violates the 10th Amendment of the U.S. Constitution by imposing a tax on states that refuse to follow federal policy.

Legal guesswork aside, Relland is offering one clear piece of advice to districts, as challenges to Obamacare pass through the courts: stay the course.

Districts should plan on complying with the employer mandate, rather than assuming it will go away and trying to catch up to compliance later, she said.

“Filing a lawsuit is not the same as invalidating a law,” she said.

Photo: Brian Rube and other protestors waited for President Obama to arrive at a charity a year ago in Dallas, where the president was headed to thank local volunteers working to sign people up for health insurance under the Affordable Care Act. LM Otero/AP.