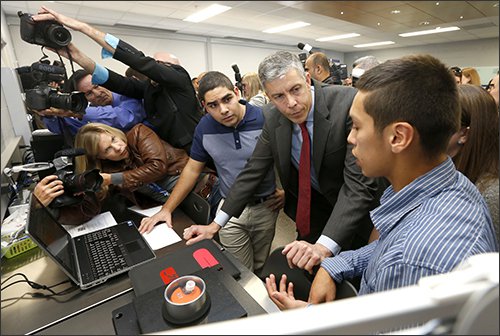 To promote wider use of open educational resources by states and schools, the U.S. Department of Education proposed Thursday a new regulation that would require any new intellectual property developed with grant funds from the department to be openly licensed.

That would make such materials available for free use, revision, and sharing by anyone. It would also represent a big, federally supported step away from the textbook publishing industry, long a backbone of K-12 education in the U.S.

“In order to ensure that all students—no matter their ZIP code—have access to high-quality learning resources, we are encouraging districts and states to move away from traditional textbooks and toward freely accessible, openly-licensed materials,” U.S. Education Secretary Arne Duncan said in a statement.

A 30-day comment period on the proposed regulation will begin after it is published in the Federal Register.

The announcement is just one part of the department’s new #GoOpen campaign. At an Open Education Symposium being hosted Thursday in Washington by the department and the White House Office of Science and Technology Policy, school districts and companies pledged to support the new drive for OER.

A group of 10 districts in California, Delaware, Kansas, Missouri, Ohio, and Wisconsin, as well as Department of Defense schools, are pledging to replace at least one textbook with openly licensed educational resources within the next year. So-called “Ambassador Districts” that already use OER—including Virginia’s Chesterfield County schools and Pennsylvania’s Upper Perkiomen schools—also committed help other districts make similar moves.

The American Association of Publishers, and the software industry association that represents education technology companies, responded to the announcement with reservations.

Is the department “willing to crowdsource our children’s education?” asked Jay Diskey, the executive director of the Association of American Publishers’ Pre-K-12 division.

He questioned whether open-ed resources, funded by federal grants, would match the quality, depth, and breadth of materials produced by publishers. “There’s a reason why education companies and education publishers exist,” he said. “It’s because they have the wherewithal to build programs that have standards alignment, scope, sequence, and rich content,” he said.

Open education resources and proprietary digital resources should be judged on a level playing field, said Brendan Desetti, the Software & Information Industry Association’s director of education policy. Digital materials need to be research-based, aligned to learning standards, updated regularly, and accessible. He said his organization, which is not opposed to open-ed resources and counts Edmodo and content-management companies that use open-ed resources among its members, wants “to ensure that the new rules provide for a sustainable flow of high-quality educational material to schools, teachers and students.”

In the meantime, the Consortium for School Networking hailed the department’s move as a welcome one, saying open resources are essential for promoting educational equity. “Encouraging and enabling educators to share, adapt, and reuse high-quality resources is a game-changer for students and their families,” said Keith Krueger, the organizations’ executive director, in a prepared statement.

The department’s efforts are just the latest step in a growing trend toward open educational content. Efforts in the U.S. Senate to overhaul the Elementary and Secondary Education Act have included language that would encourage schools to use OER, and adaptive-learning company Knewton recently launched a new platform to bring its technology to the open-content marketplace. States such as New York have robust existing initiatives to develop and share open content, and last spring, California-based nonprofit the Learning Accelerator announced contracts with 10 companies to develop open materials for 12 states.

“By requiring an open license, we will ensure that high-quality resources created through our public funds are shared with the public,” John B. King Jr., a senior advisor in the department who will become acting secretary when Duncan steps down in December, said in a statement.

“We are excited to join other federal agencies leading on this work to ensure that we are part of the solution to helping classrooms transition to next generation materials,” King said.

— Michele Molnar contributed to this story.

One thought on “Open-Ed Resources Would Gain Ground Under Ed. Department Proposal”