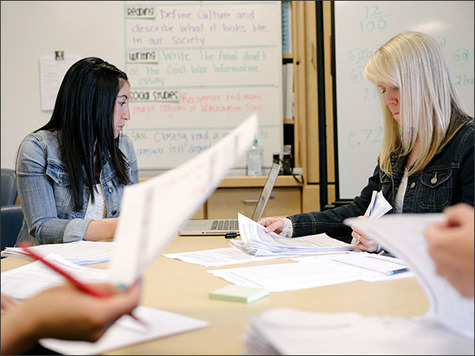 After years of spending heavily on commercial textbooks and digital content, some districts are now attempting to break out into the “open”—the realm of open educational resources, that is.

Over the past few weeks, I’ve written a batch of stories about efforts to use and share open educational materials, which are basically defined as free resources created on a license that allows users to share, revise, and repurpose them as they see fit.

The stories have probed the issue from a number of angles, including the rise of large-scale open educational projects aimed at bringing the resources to potentially massive populations of students across entire states. One of those efforts is EngageNY, an online resource created by New York state with federal Race to the Top dollars, which has churned out resources that have been downloaded an estimated 20 million times.

Another ambitious effort is the K-12 OER Collaborative, comprised of 12 states working together to develop a shared library of open resources. The collaborative is also taking the unusual step of allowing developers to take those materials and trying to modify and sell them commercially, in the K-12 market.

For K-12 officials trying to decide whether open educational resources make sense for them, here’s a basic primer on the topic I’ve created through Prezi, below. It offers a guide to terminology, state and local experiences with open materials, financial implications for using them, and other questions to consider:

K-12 district leaders thinking about going the open route would also be wise to pay close attention to the experiences of a pair of early pioneers in Washingon state, both of which made the leap.

In Education Week’s newly released special report, Tech Counts 2015, I profile the two districts, the Bethel and Grandview, Wash., school systems, each of which took different paths to adopting open materials and faced different obstacles in shifting away from commercially produced content.

Look for more of our coverage of the open educational movement in the time to come, as the market for those resources evolves, and commercial vendors adjust.