Parents in the U.S. pumped billions more dollars than usual into their children’s education during the pandemic, in large part because they sought out services and curriculum directly rather than relying on their school to provide them, a new analysis found.

Families spent an estimated $232 billion on private schools and education-related activities, an increase of nearly $20 billion or about 10 percent from annualized spending in previous years, according to the survey of more than 3,000 parents.

Most of the massive increase was attributed to parents taking their children’s education into their own hands, either by switching to home schooling or creating a learning pod to supplement schoolwork. Learning pods alone accounted for $70 billion in spending, according to the report. The analysis, conducted by education consulting group Tyton Partners, also captured a decline in spending on products and out-of-school activities.

The shift had a significant impact on education companies, creating new demand for their products and prompting some of them to customize the resources they sell to the needs of parents, in addition to classroom educators.

While most parents suggested their children would return to schools when they reopened, saying the top influencing factor in their decisions is the state of the pandemic, the study’s authors say that parents will likely continue to be more involved in their child’s education post-pandemic and willing to pay to fill any perceived gaps.

“Parent agency is on the rise,” said Tanya Rosbash, one of the study’s authors, in an interview.

“We are seeing parents acting and consuming in a different way than prior to the pandemic. I think that is an opportunity for companies.” 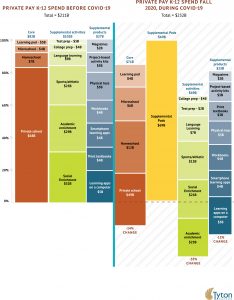 Home schooling saw “explosive” growth during the pandemic, according to the report. The number of children learning at home increased by 63 percent from the year before, or by about 1.2 million students.

It’s a similar story among families who created learning pods, or small groups of children who learn together at home. In some cases, the pods were solutions to child care problems, with a group of children rotating from one family home to the next. In others, parents pooled their money together to hire a certified teacher, curriculum, and supplies.

The survey found that 12 percent of parents put their children in a pod during the fall of 2020, which equates to about 7 million students nationwide. A quarter of higher-income families had at least one child in a pod. They generally spent nearly seven times as much on those small groups as lower-income families.

The rise in pods has brought with it an ecosystem of providers trying to produce everything parents need for a more structured “do-it-yourself education,” said Adam Newman, one of the report’s authors and a founding partner of Tyton Partners. They offer everything from matchmaking services that help parents hire teachers to administrative support.

“It raises a really interesting question,” Newman said. “What are the right type of investments and services that families and parents are going to want and need?”

EdWeek Market Brief’s virtual summit, being held June 8-10, offers intel to education companies trying to understand K-12 districts’ most pressing needs. It features panels and flash briefings with district decision-makers and company executives, as well as original survey data on where district spending is headed in the fall, how companies have adjusted and reorganized themselves during the pandemic, and what districts want from businesses in an evolving landscape. You can register here.

The report found mounting evidence that, for many families, home schooling and learning pods were a temporary and inconvenient solution while school buildings were closed. Parents who used pods said it negatively affected their lifestyle, forcing them to change the hours they work, spend more time driving their child, and dip into their savings.

But that doesn’t necessarily mean the phenomenon is over. Learning pods could evolve to meet families’ needs post-pandemic, Rosbash said. And 9 percent of families are still unsure of where their child would attend school next year, according to the study. Scaled nationally, that’s as many as 5 million students.

“Even if a portion of those do not [return to school], it will undoubtedly be a big enough number [and] have a material impact,” Newman said.