Pearson’s stock plummeted by about 30 percent on Wednesday, to about $7 a share, upon releasing a trading update in which it acknowledged grim news on a number of important fronts and vowed to restructure its operations—including speeding up its transition from print to digital materials.

In a statement, Pearson CEO John Fallon said the company would be taking “radical action” to accelerate its shift from print to online models, bolster its higher education products, and recast its overall business.

“The education sector is going through an unprecedented period of change and volatility,” Fallon said. “We have already taken significant steps in restructuring, reducing our cost base by £375 million last year.”

In an effort to right the course of the education supertanker, Pearson officials announced changes on several fronts, including plans to sell its 47 percent stake in the publisher Penguin Random  House; slash dividends; and reduce risk in the large-scale delivery of educational products, focusing instead on online, virtual, and blended services. It said it would also slash its rental prices for e-books across 2,000 titles, and launch its own print rental program.

Pearson is widely recognized in K-12 circles in the United States for its work in K-12 assessment, even though executives say that business represents a relatively small share of what the company does. The company’s reputation has taken a beating in some U.S. education circles in recent years, as wariness of private sector involvement in schools has grown.

Pearson officials said that aside from the company’s North American higher education courseware, its other businesses have performed in line with expectations. Those businesses include online program management, virtual schools, and professional certification programs.

The company said school courseware suffered from a smaller market and low enrollment, but those setbacks were expected. Profits in student assessment rose slightly, even with steep declines in revenue, partly because Pearson slashed costs in that area.

But Pearson took a beating in the higher education market. The company said its net revenues in that area fell by 30 percent during the final quarter of 2016, which resulted in an unprecedented 18 percent decline for the entire year. Lower student enrollments among community college students and older students were one culprit, as was an inventory backlog from previous years. (See a chart from the company’s market update, below, breaking down how its assumptions compared with outcomes last year.) 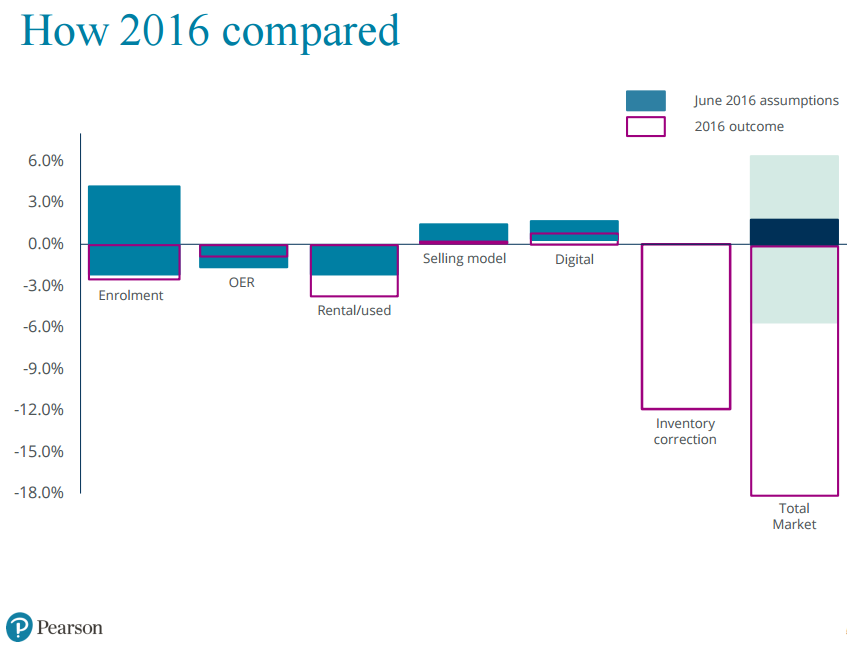 About 50 percent of Pearson’s roughly $7 billion in annual revenue comes from the college and K-12 courseware market, Fallon said in an interview with Education Week last year.

Thirty percent comes from assessment—including high-stakes assessment—and the remainder comes from other services to schools and colleges, including virtual education.

“We are facing difficult trading conditions in our largest business as we transition to digital,” Pearson’s chairman of the board, Sidney Taurel, said in a statement accompanying Fallon’s. “[W]e are confident that the plan announced today will allow the company to navigate these conditions and build on its leading position in higher education.”

Image above provided in Pearson’s trading update this week.