It’s probably safe to assume that most private school operators aren’t eager to absorb new government regulations, particularly if those policies are going to have a direct impact on the lives of their schools. But when it comes to a potentially financially beneficial opportunity—taking part in publicly funded voucher programs—what kinds of regulations and requirements bother private schools the most? A new report takes a look.

The Thomas B. Fordham Institute, in its report “School Choice Regulations: Red Tape or Red Herring,” examines which voucher program requirements and regulations sway private schools’ decisions on whether or not to participate.

The report, written by David Stuit and Sy Doan of Basis Policy Research, draws its results from a survey of private schools in cities—Cleveland, Cincinnati, Dayton, Indianapolis, and Milwaukee—served by some the country’s largest, or most-established voucher programs. The survey was given to school principals in 369 schools, 241 of whom responded.

On the whole, private schools were most worried about voucher programs’ regulations that might impose changes on their admissions procedures. Fifty-two percent said “upholding student admissions criteria” was either a very important or extremely important factor in whether they decided to take part in a private school choice program.

The fear was that the choice program might require private schools to compromise the admissions criteria they apply to non-voucher students, Stuit explained in an e-mail.

The potential flood of paperwork was the next-most-important factor, followed by questions about the maximum dollar amounts offered for the vouchers. One regulation that did not rank high on the list of concerns: requirements to take part in state testing, a mandate that is in place in a number of states with voucher systems. Just 25 percent of respondents said that weighed heavily on them.

Drawing from different responses provided through the survey, the data suggest that school officals are “less concerned about the accountability aspect of state testing than they are about the burden of actually administering the tests,” Stuit and Doan concluded.

In comments provided with the survey, “many respondents expressed frustration that they have to administer the state tests in addition to the norm-referenced tests required by their diocese or governing body, or they voiced concern that standardized testing was incongruent with their school’s educational philosophy. However, none of the respondents commented on the publication of test results or other aspects related to accountability.”

Here are the responses from private school officials, when asked how voucher programs’ regulations shaped their thinking about whether to participate: 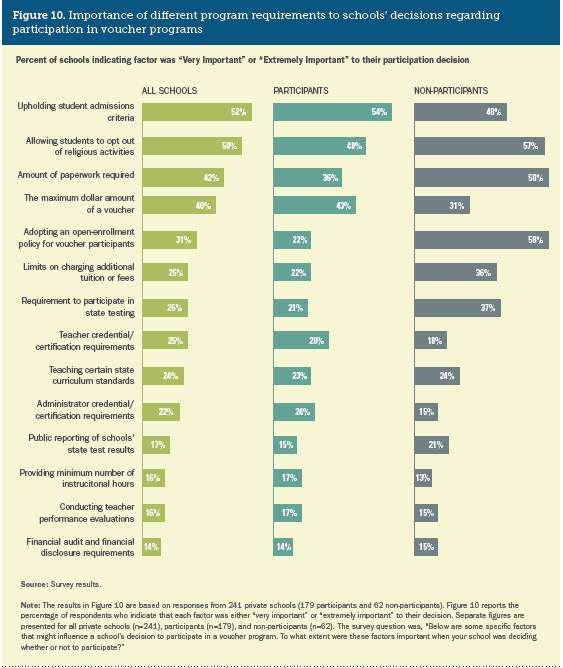