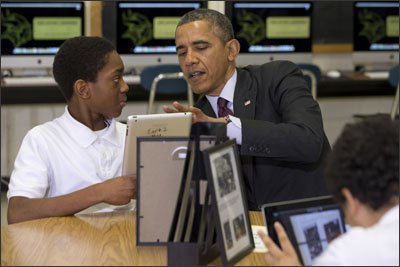 President Obama visited Buck Lodge Middle School in Adelphi, Md., today to announce that several major corporations will contribute of more than $750 million worth of support to help K-12 students across the country connect to the Internet in school and at home, and to provide devices, software, and content, as well as teacher training.

“I’m only standing here today because my education gave me a chance,” Obama told the assembled students, educators, business leaders, and invited guests.

He acknowledged each of the companies’ pledged contributions:

Obama praised the companies’ leaders, saying they made major commitments “because they know that your education is the very best investment that all of us can make in America,” he told the  students in the audience. “They know that the entire economy will be lifted if more of our young people are doing better. So they’re doing good, but it will also help them succeed from a bottom-line perspective by this kind of participation.”

The infusion from corporate America came, Obama said, because people in government “picked up the phone” and reached out for support. Their commitment advances part of the president’s ConnectED initiative to provide 99 percent of the nation’s schools with access to high-speed broadband technology within five years. AT&T pledged over $100 million to provide middle school students free wireless connectivity for three years, and Sprint is offering $100 million worth of free service for up to 50,000 low-income high school students over the next four years.

In another ConnectED development, the Federal Communications Commission announced Monday that it would expand funding on broadband through the E-rate program from $1 billion to $2 billion annually, for a total increase of $2 billion. Currently, only about 28 percent of schools have the high-speed Internet connections they need.

Reaction to the president’s speech was largely favorable. Doug Levin, executive director of the State Educational Technology Directors Association, attended the speech, which he called “exceptional.”

“It’s a rare thing for a politician at any level to be able to explain the broader shifts that are happening in education due to technology, and to show what that means to individual teachers and students,” said Levin, who also credited Obama with not “over-hyping” the role of technology in education.

While details have yet to emerge about how the free goods and services will be distributed, Levin said he hopes the contributions are meaningful and support what schools need.

Evan Marwell, the CEO of EducationSuperHighway, a San Francisco-based nonprofit that advocates improving Internet access in schools, said this public-private partnership is a “momentous” development. “I can’t think of a lot of times when private industry has stepped up with three-quarters of a billion dollars,” he said, indicating that his organization encouraged Sprint’s participation.

Now, an effort is underway with the department of education and the businesses involved to coordinate the various gifts so they are aligned for maximum impact, according to Marwell. “Everyone knows this is a huge opportunity, and we can’t afford to blow it,” he said, adding that he would expect there to be transparency about how the contributions are distributed. His organization will be watching, he said, “especially in terms of making sure things are getting done in a good way.”

“Investments like this help close the digital divide, and will empower a sub-sect of America that is often overlooked,” said Bartees Cox, a spokesman for Public Knowledge, an organization that works to preserve the openness of the Internet and the public’s access to knowledge.

Mark Edwards, superintendent of the Mooresville, N.C., school district where the president announced ConnectED last year, said in an email that this is “precisely the kind of directional nurturance that we need in public education today.” Known for the digital conversion he inspired in Mooresville, Edwards continued: “Districts all over the country can leverage this investment to [improve] teaching and learning for the digital age. I hope this exemplary effort will be seen as a message for our country that investing in our schools and children should be a moral imperative.”

John Bailey, executive director of Digital Learning Now, an advocacy group based in Tallahassee, Fla., said he was encouraged by the technology and telecom companies’ backing for school technology, though he also said he hoped that public and private sector interest in the issue would not wither over time. “Any time there’s investment in education innovation, that’s a good thing. But the key is making sure we have a policy environment that encourages this on an ongoing basis,” said Bailey, adding that it takes “more than a one-time surge of funding.”

The Verizon Foundation, one of the corporate contributors with up to $100 million in cash and in-kind contributions to expand existing and start new programs, is already measuring its impact in helping 230 teachers in 24 states use technology in their STEM classes. Rose Stuckey Kirk, the foundation’s president, said that after getting training in how to incorporate technology, 59 percent of teachers are reporting that they can now individualize instruction, and 40 percent of students are increasing problem-solving skills.  “We recognized we have to do more than just have connectivity and the devices,” she said. Verizon’s commitment will increase to include all states and the District of Columbia over the next three years.

Levin said it will be up to schools to ensure that the gifts of access are “ultimately leveraged to improve education, not entertainment.” The corporate infusion will “have to work for all kids and schools,” he said.

John Musso, the executive director of the Association of School Business Officials International, supported the corporate infusion because schools are financially strapped. But he was hoping to hear  more details in the announcement about how the funding will be distributed, because members of his organization are already asking questions like, “What strings are attached?” and “What are the guidelines?” He is also concerned about sustainability. Each of these initiatives has an end date. “Like the lightbulbs in a new house, they all go out at the same time and you have to replace them,” he said. “What happens then?”

In a media briefing before today’s announcement, Gene Sperling, director of the National Economic Council, emphasized the universal need for digital education. “ConnectED is not fundamentally about wires and wireless; it’s about young people and whether they’re learning in a 21st-century classroom,” he said. “You cannot have the vision of every child working at their desk with digital learning …without high-speed broadband to allow that type of individualized learning.”

On Wednesday, FCC Chairman Tom Wheeler is expected to provide more details about the agency’s plans, announced earlier this week, to restructure the E-rate program and direct additional money for schools’ and libraries’ broadband needs.

Sean Cavanagh contributed to this report.

This post has been updated with comments from John Musso, the executive director of the Association of School Business Officials International.

Photo: President Barack Obama looks at a student’s iPad project at Buck Lodge Middle School in Adelphi, Md., on Tuesday, where he spoke about his ConnectED goal of connecting 99 percent of students to next generation broadband and wireless technology within five years. (Jacquelyn Martin/AP)