Sixty percent of public school principals say they have a major influence over their school budgets, while only 40 percent said they have that same amount of influence on establishing curriculum, according to a national study released this week by the federal government.

Principals in suburban schools were the most likely to say that they have a major influence on school budgets (66 percent), but they were least likely to report that level of influence on curriculum choices (33 percent.)

Visit EdWeek Market Brief’s LinkedIn page to share your thoughts about the most pressing issues facing education companies. And check out EdWeek Market Brief, a service that provides companies doing business with schools with news, analysis, and original data on the needs and priorities of K-12 systems.

The study—called “Data Point: Public School Principals’ Perceptions of Influence by School Level and Community Type”—is based on responses to a questionnaire from the U.S. Department of Education’s National Center for Education Statistics 2015-16 National Teacher and Principal Survey. This nationally representative sample survey polled principals in public K-12 schools in the 50 states and the District of Columbia.

The public school principals were asked, “How much ACTUAL influence do you think you have as a principal on decisions concerning how your school budget will be spent?” [The emphasis was part of the question.] 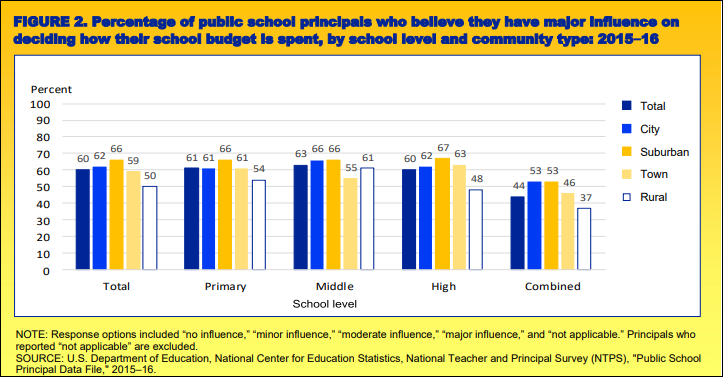 Fewer principals, across the board, report having a major influence on curriculum selection than they do on budgets.

Asked “How much ACTUAL influence do you think you have as a principal on decisions concerning established curriculum at this school?,” principals from rural schools had the highest (49 percent), and from towns the next highest (43 percent).

Suburban middle school principals were least likely to say they have a major influence in this area, with 29 percent in that category, and 31 percent of suburban primary principals at that level of influence.

Other than in combined schools, high school principals from towns are most likely to report having a major influence on establishing curriculum, the study found, with 51 percent reporting that level of influence.

See how principals leading different levels of schools and from various types of communities responded below: 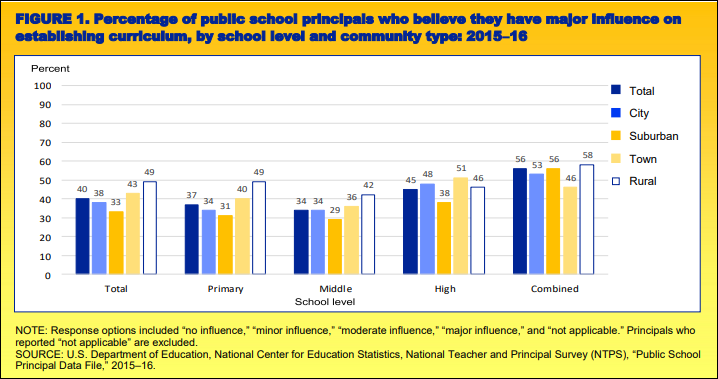 From Education Week‘s 2018 Technology Counts research, we found another area where principals are feeling pressure: the proliferation of technology in their schools.

To better understand where the ed-tech pressure points are for principals, the Education Week Research Center conducted a nationally representative survey of 500 principals, assistant principals, and other school leaders. Technology Counts 2018 incorporates that data in the report, while taking a hard look at what principals are thinking and doing about some of the most vexing technology issues in their schools.

Our findings show that principals are struggling with questions like, “Is personalized learning worth embracing?” and “Are students spending too much time in front of computer screens?”

We’ve captured what principals really think about tech on this page with interactive charts summarizing our findings.