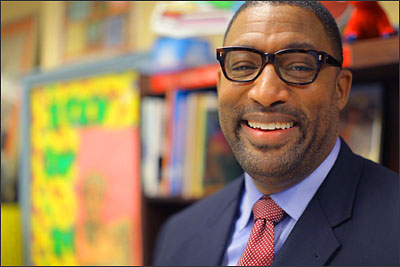 When Mark Zuckerberg, Facebook’s CEO and founder, announced from Oprah Winfrey’s couch three years ago that he would donate, through his Startup: Education foundation, $100 million to Newark schools, there was little indication from the crowd’s cheers and the grins from Newark Mayor Cory Booker and New Jersey Gov. Chris Christie how complex the process of spending that money would be.

Newark doesn’t see a cent of that money unless donors other than Zuckerberg step up. And all of the money is collected and allocated through the Foundation for Newark‘s Future, a nonprofit organization with a controversial variety of stakeholders as board members and a five-year window (with three and half years left) to raise and spend the money.

There are also limitations on how that money can be spent. Individual donors can make general donations or must pledge money to one of six focus areas: early childhood education, out-of-school youth, teacher quality, Common Core State Standards, school options, and community engagement.

So far, about $50 million has been raised (and matched, putting $100 million at the foundation’s disposal), but only $16 million invested. (Early donations include $5 million from Goldman Sachs, $10 million from venture capitalist John Doerr, and $3 million from the Bill & Melinda Gates Foundation, which also helps fund Education Week‘s coverage of business and innovation). In a recent interview at Education Week in Bethesda, Md., Gregory Taylor, the president and chief executive officer of the Foundation for Newark’s Future and a veteran of large national foundations, discussed how to manage the moving parts and varying opinions that come with a $100 million grant to an urban school district.

Education Week: So how exactly does the donation and the allocation work?

Gregory Taylor: So first, what was really important from our perspective: that the new philanthropy was not to use or draw from existing foundation dollars to unlock the Zuckerberg money. Newark is struggling like many urban centers for philanthropic dollars. We didn’t want to take money from existing community-based organizations because we had this challenge.

There’s two ways in which money comes into the fund. First are direct contributions to us as an organization, and then as those dollars come in, they are then matched, and we use the revenue to invest in those six strategies [mentioned above] and promising programs in Newark. The second is that it has to be specifically focused in Newark.
So when money is put into a teacher development program that we think is quality, the dollars that the donor has put into that organization would also unlock matching money from our fund. And then those unlocked dollars are distributed between the six strategies that we’ve talked about.

EdWeek: So you’ve raised $50 million and also matched that amount, but you only invested $16 million? What’s the reason for the discrepancy?

Taylor: Oftentimes we get this question like, “Oh, if you raise money, why aren’t you spending it as you go?” It’s not a race, it really is meant to be as strategic and thoughtful around how those dollars are invested. And remember, we’re trying to play at the systems level. In many ways, it requires many of our partners. We want to leverage resources from the state. We want to build on the superintendent’s leadership. We want to help organize the charter sector. We want to work with local leaders. And all of that takes time. So each of the investments we’ve made are really quite thoughtful, and I think are going to have high impact. But it’s not about $50 million in, $50 million out, as fast as we can get it done. That would be a mistaken use of the revenue.

EdWeek: What’s the relationship between the state (which controls the school district), the foundation, the school system, and the mayor? How are all those people influencing the decision-making?

Taylor: The state, the mayor, philanthropies, and others—we certainly work very closely in partnership, but we’re an independent organization with our own governance board like any other foundation. And so, ultimately, the dollars that are invested are approved after our staff brings compelling and thoughtful investment opportunities to the board to decide.

Funding distributed by Foundation for Newark’s Future in target areas:

Provided 10 free books to elementary students at eight Newark schools at a cost of $176,000; provided $200,000 for a national early childhood language education program in Newark.

EdWeek: But what if you get $10 million in matching funds and you go to [Newark Schools Superintendent] Cami Anderson and say ‘We want to put it into a teacher evaluations system’ and she says ‘No, I don’t want that, I think our greater need is in special education’ or something like that? What happens then?

Taylor: I think scenarios like that have happened. I think the notion is, we all come to this kind of conversation with expertise and thought about how to move forward, and we wouldn’t want to do something that is outside of the plan that the superintendent has laid out for the city. But we also are clear that we have perspectives and experiences and recommendations to move us forward. If we do get to a point where there are divergent ideas on how to move forward, it ultimately rests with our board as to how we would resolve that issue.

It doesn’t mean you always win, but it certainly means that you have to work in partnership to impact this community. And we’re really clear about that.

EdWeek: This is true of a lot of urban districts, but Newark’s budget is in bad shape. What are the conversations like around using this money to fund stopgap measures to get the district’s budget in better shape, rather than trying to fund things like innovation or reform?

Taylor: None of our investors, nor I, would be interested in throwing good money after bad, so there’s no desire to fill stopgaps. But we did provide a very significant grant to a financial audit, we funded a significant grant on the human capital pipeline issue, and out of that comes learning and lessons that provide a road map for improving the district’s operational excellence. We’re not funding stopgaps to fix roofs on buildings or replace textbooks, even though those are critically important infrastructure expenses. But the notion that we can tighten up the financial gaps in the systems in place and the management structures is a really prudent investment. I do get asked a lot to help with stopgaps, both from parents and school principals and our incredible fundraisers, but we’re trying to stay at the systems level.

EdWeek: I think with some of the high-end, return-on-investment-minded philanthropy that’s become more prevalent, there’s been concern that it’s pushing ideological views. Certainly when you have people investing from the financial sector and Wall Street, those concerns grow larger at the local level.

So I’m curious, do you feel any sort of ideological obligation when it comes to raising money and distributing it?

Taylor: I look at it a little differently. I think there are a couple of reasons why some of our investors have decided to do this. There’s a shared fate argument, where we’re only as strong as our ability to educate our most difficult-to-educate child. I think that implies global competitiveness and the like, and it’s a really compelling dynamic for folks.

Foundation for Newark’s Future board of trustees:

The education reform movement can benefit from an emphasis on return on investments and accountability. Now, I think we’ve tipped too far in many ways, and I think my job and the jobs of some of the leaders that I admire, is to level-set expectations. There’s that sense in business where you invest today and return tomorrow, and that doesn’t happen in education reform. But I’m excited about the three-and-a-half year road map that we have, because there’s that ‘urgency of the now’. We have to counter that historic drip-drip-drip progress that has been typical of education reform.

EdWeek: This is a simple question but, how do you raise money?

Taylor: You have people who say, “Wow, I want to be a part of that.” So if you look at our track record, that’s where our initial dollars came from. It helps that you have someone as magnanimous as Cory Booker helping to do that.

Then you have a second wave of funds from investors who are contributors and want to see plans, want to see leadership in place, and want to test it as you go to make sure what you’re working toward is both realistic, thoughtful and well-planned. So that’s the second wave of investment, and again, if you look at our track record, that also happened.
I do think you have to have really compelling, thoughtfully presented ways in which progress is measured and articulated, and folks can understand how their influx of cash can move you to the next level. It’s always difficult to raise money, particularly in this environment, but I think we’ve been relatively successful adhering to that road map.

EdWeek: What’s Mark Zuckerberg’s level of involvement at this point?

Taylor: He recognizes that he’s not an educational expert. He is completely hands-off; he has a little company to run called Facebook. We certainly keep him abreast of our work and progress to date, but his involvement is intentionally hands-off and I admire him for that. I know a lot of times people who give donations feel like it entitles them to a level of expertise they may or may not have, and I think he’s very thoughtful about that. He thinks, “I’m going to hire educational experts, let them do their jobs, but be clear about the direction that they’re going.”