We’ve known for some time that EngageNY, an online repository of open educational materials, has a magnetic quality for many of the nation’s educators, millions of whom have downloaded its resources for use in their schools.

A new report by the Rand Corporation offers some specifics on why teachers’ appetites for the English/language arts and math resources are so strong.

The materials housed on EngageNY are aligned to the Common Core State Standards and were created as “open” education resources, meaning they are free to users and can be shared and altered as educators want. The site, created by the state of New York, has drawn more than 17 million users and has had 66 million downloads since its resources went online in 2011,  according to the most recent numbers from New York’s education department, as my colleague Liana Heitin reports.

The Rand report says that 30 percent of math teachers and more than 25 percent of English/language arts teachers nationally are using the EngageNY in some way. The numbers were higher in individual states that are using the common core and similar standards, according to Rand.

Among the other findings:

The graphic below offers a breakdown of what teachers said about how district policy influenced their decisions in using EngageNY: 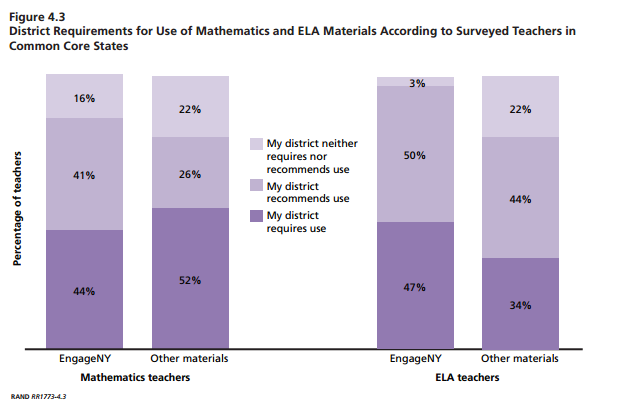 The report draws from different data sources collected during the 2014-15 and 2015-16 school years. The data include prior surveys of teachers conducted by Rand as part of the American Teacher Panel, as well as Google Analytics reports provided by the New York state education department.

For a deeper look at changing district demands for open resources, stay tuned for an Education Week special report on curriculum being released this week.