International investment in educational technology has spiked over the last decade with venture capitalists pouring 14 times more into the sector in 2019 than they did in 2010, according to a report released Tuesday.

The pre-K through workforce ed-tech sector saw $7 billion in venture capital investments in 2019, which is $6.5 billion more than 2010, according to the report, from education research firm HolonIQ. Over $87 billion is expected to be invested in ed tech over the next decade.

As for where those investments are being made, companies headquartered in China topped the list of countries during the last decade, as Chinese and other investors spent a total of $16.6 billion on ed-tech investments globally, HolonIQ co-CEO and co-founder Patrick Brothers said in an email.

Get a window into state markets—and gain key insights about what states want from vendors—in the Thursday, Feb. 13 EdWeek Market Brief webinar. Speakers will be Christine Fox, the deputy director of the State Educational Technology Directors’ Association, and André DeLeón, an education programs professional for the Nevada Department of Education. Learn more and register here. 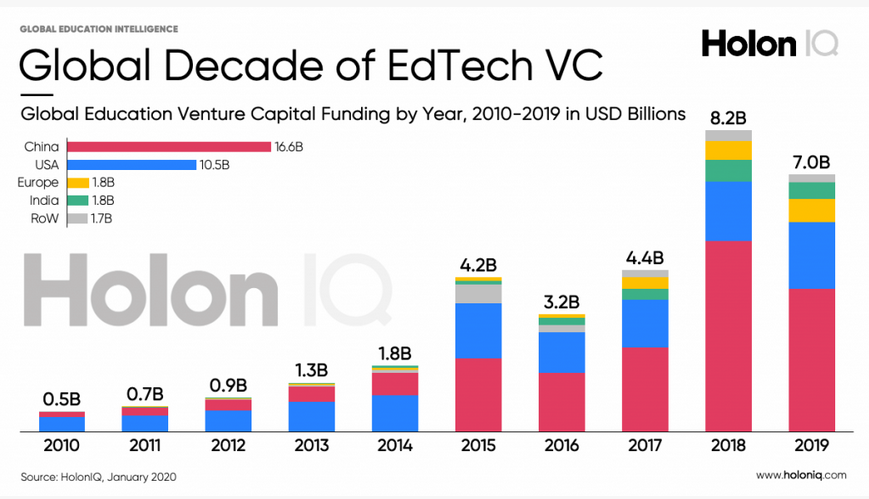 Education and training expenditures from governments, parents, individuals, and corporations are expected to reach $10 trillion by 2030, according to the report.

Yet Brothers also pointed to Organization of Economic Cooperation and Development data showing that public spending in education is decreasing in the aggregate over time, while the HolonIQ report says that less than 3 percent of total public and private expenditures in the K-12 through workforce sector was allocated to digital products.

Advanced technology learning and education applications will start to hit their strides by 2025 with augmented and virtual reality and artificial intelligence becoming more integrated into core education delivery and learning processes, most likely starting in the corporate and non-accredited sectors, according to the report.

“Public-private partnerships will be critical to supporting future growth, innovation and access to education,” the report notes.