The worldwide market for Chromebooks, while relatively small, is surging, a growth fueled primarily by sales of the devices in the U.S. education market, according to newly published market research.

Sales of the devices—defined as mobile devices that run on Google operating systems and mainly use cloud systems for storage—will jump by 79 percent from 2013 to 2014, and will reach 5.2 million units sold this year, according to Gartner Inc., a research and advisory company.

Gartner says that the education sector made up 85 percent of Chromebook sales in 2013. Overall, of 2.9 million Chromebooks sold during 2013, 82 percent were sold in North America, the company says. So far, the interest in Chromebooks in the education community has not spread widely throughout the business sector, according to Gartner.

Just to keep the Chromebook growth in perspective, Gartner predicts that the personal-computing models will remain a “niche market” over the next five years, unless the companies selling them offer improved features that include faster memory access and faster connectivity.

“Making a Chromebook competitive is not just a matter of hardware and price,” said Isabelle Durand, a principal analyst at Gartner, in a statement accompanying the release of the research. “What is important is to show how the device’s cloud-based architecture provides genuine advantages to users.”

(Gartner has released a summary of its research to the public. It offers a more detailed analysis of Chromebook sales at a cost.)

Who currently leads the Chromebook market? Gartner says it’s Samsung, followed by Acer, both of which were early investors in the devices: 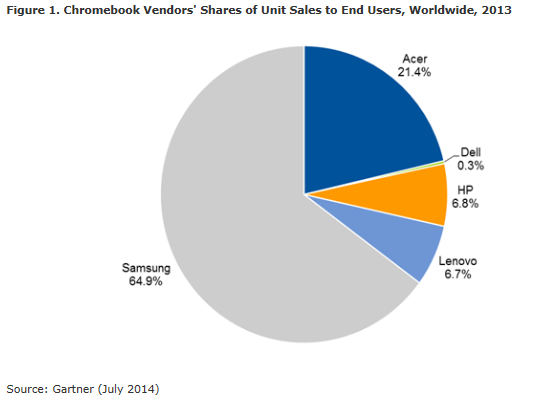 Samsung is “especially dominant” in the education market for Chromebooks, selling personal computing devices that are popular in primary and secondary schools, Gartner says. But the research organization also sees room for competition.

HP, for instance, has a large customer base in both the education and business spheres, and thus could stand to gain going foward. And Lenovo’s Chromebooks are “very rugged,” Gartner points out, a feature that could serve them well  in schools, where the devices presumably stand to take some abuse.