Thousands of U.S. schools recently received an invoice for $647.50  for 50 common-core-aligned “Math Practice” workbooks that they didn’t order or receive.

The realistic-looking but bogus invoice is popping up in school purchasing offices nationwide, according to Ron A. Skinner, deputy executive director of the Association of School Business Officials International, or ASBO, a Reston, Va.-based educational association for those professionals.

Invoices from “Scholastic School Supply,” with an address in either Sewell, N.J., or Las Vegas are being addressed to individual schools within a district. The Better Business Bureau offices in Nevada and New Jersey report receiving more than 3,000 inquiries and 87 formal complaints originating in 26 states about the invoices. The Nevada office released a “scam alert” on Sept. 5 about the company. 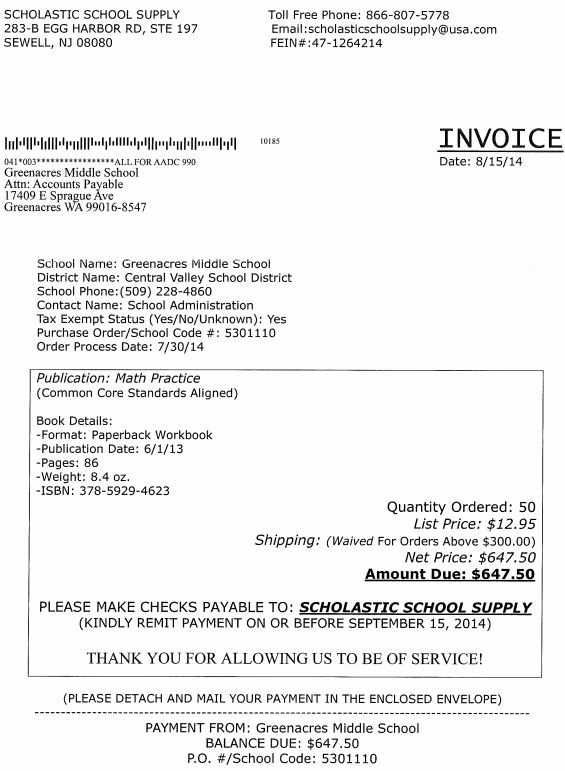 The phone number for Scholastic School Supply, listed on its multitudes of invoices, has been disconnected.

Scholastic, Inc., the New York City-based children’s book publisher, ed-tech provider, and children’s media company, issued its own statement indicating that many of its customers have received invoices from a company calling itself “Scholastic School Supply,” which has no affiliation with Scholastic.

“Scholastic …has demanded that they cease and desist using Scholastic’s name and trademark, which they have agreed to do, but they seemingly have not done so as of the date of this communication,” according to the statement issued Wednesday. In addition, Scholastic said it would take “prompt appropriate action” if it finds the Scholastic School Supply is “allegedly violating any other laws, rules or regulations.”

Officials with the Federal Bureau of Investigation, various state attorneys general, and the U.S. Postal Inspector’s offices in Nevada and New Jersey have been notified of the invoices, according to business officials posting comments on the ASBO members-only listserv.

Darren King, purchasing manager at the 13,000-student Central Valley School District #356 in Spokane Valley, Wash., first brought the issue to his colleagues’ attention via that outlet after learning about it from the statewide business officials organization.

In 17 years working in purchasing for a school system, King said he had never seen anything like this. What flagged the invoice is that there was no purchase order matching the invoice—which was identical for any schools in a district that received it—except for the name and address of the school receiving it.

Skinner agreed that an attempt to collect money on this scale was unprecedented in his experience. “This is blatant,” he said.