Cross-posted from the Inside School Research blog 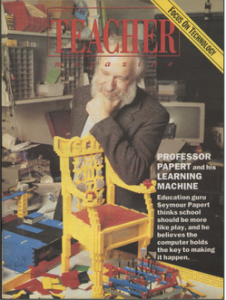 movements, died this week at his home in Maine. He was 88.

Papert was an expert and groundbreaking researcher in both artificial intelligence and child development, and he was a passionate advocate of using educational technology creatively to push students to explore and learn in new ways.

“I think computers are inherently subversive, even though they are captured by the system and tamed. But the potential is still there for them to be used in other ways,” Papert told Education Week’s Teacher Magazine in 1994.

“In my vision, the child programs the computer and, in doing so, both acquires a sense of mastery over a piece of the most modern and powerful technology and establishes an intimate contact with some of the deepest ideas from science, from mathematics, and from the art of intellectual model building.'”

Papert was born and educated as a philosopher, mathematician, and anti-apartheid activist in South Africa. He studied at the University of Cambridge in England and the University of Geneva with renowned child psychologist Jean Piaget before starting a long career at MIT in 1968. He co-founded the Media Lab, where he led a movement in constructionist education theory, which posits children learn best by making things and working through problems in the world around them. He expanded on those ideas in the 1980 book Mindstorms: Children, Computers, and Powerful Ideas and 1984’s The Children’s Machine: Rethinking School in the Age of the Computer.

He co-invented Logo, a programming language designed specifically for elementary grades, which taught generations of children to code through giving directions to a digital turtle. He co-founded and chaired the Logo Foundation, named for the program, which supports computer education for children.

“There’s no question that there’s a certain real holding power” for students using computers, he told Education Week in 1983. “This tells us that we can harness these powers. We have to think in terms of what will make children fall in love with learning.”