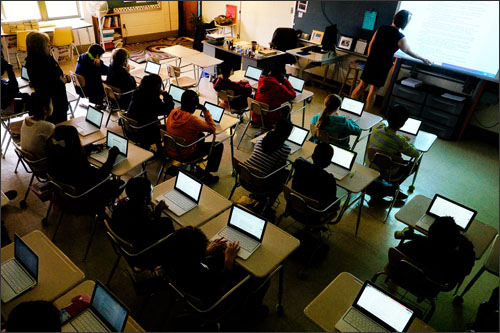 Worldwide sales of Chromebooks, the mobile devices built to run on Google’s Chrome operating system, are on the rise, and in the United States a strong majority of the devices sold are used for education, a new analysis reveals.

Sixty percent of the Chromebook sales in the U.S. market are coming in the education sector, while nearly 40 percent are sold in the consumer market, according to Gartner, Inc., a technology research and advisory company.

Overall, Chromebook sales appear to be surging globally. Gartner projects that sales to end users of devices will reach 7.3 million units in 2015, a 27 percent jump of 2014.

Education Week has reported pretty extensively on Chromebook’s growing attractiveness to many K-12 schools, some of which see them as appealing alternatives to iPads. Some schools seeking to make ambitious ed-tech purchases have been attracted by the devices’ ability to promote teacher/student collaboration, and by their relatively low cost—under $300, in many cases.

In other regions of the world, the share of Chromebooks being used for education is even higher than it is in the United States. In Europe, the Middle East, and Africa, combined, about 72 percent of sales of Chromebooks are devoted to educational purposes. In the Asia-Pacific region, it’s 68 percent.

Outside of education, in the consumer market, buyers of Chromebooks tend to be “tech-savvy individuals who purchase one as a companions device to their primary notebook or desktop PC,” Gartner reports. In some cases, those buyers take them up as their second computing devices in a household, to supplement their PCs.

In the business sector, by contrast, Chromebook sales are quite small, despite interest from modest-sized businesses intrigued by the devices’ low cost, Gartner officials said.

Overall, North America is dominating the market for sales of Chromebooks, the analysis found. Eighty-four percent of Chromebooks are being sold in that region, with the European/Middle Eastern/African market a distant second, at 11 percent.

17 thoughts on “Sixty Percent of U.S. Chromebook Sales Are for Education, Report Concludes”