Students who enroll in online courses come to those forums with a host of academic demands—not just in core subjects, but also in career-and-technical education, the arts, and even driver’s education.

Recent data from the Evergreen Education Group, a consulting organization that has spent years studying the virtual school world, speaks to those eclectic interests.

The organization’s most recent annual report, “Keeping Pace With K-12 Online Learning,” breaks down which online courses students are choosing most often to supplement their academic work.

Full-time, online cyber charter schools have received the bulk of the public’s attention recently—and the academic performance of those schools has been strongly criticized. But the Evergreen report focuses on a different piece of the virtual landscape: the students who are taking courses on a part-time or piecemeal basis in addition to the classes most likely delivered to them in traditional, brick-and-mortar settings.

Evergreen breaks down course enrollment by subject area in 21 of the 24 state-run virtual schools from the 2015-16 year. The results are shown the graphic below. Roughly 510,000 students took classes in those state virtual schools.

All told, the state-run virtual schools had 935,000 course enrollments, which amounts to an average of 1.84 courses per student. 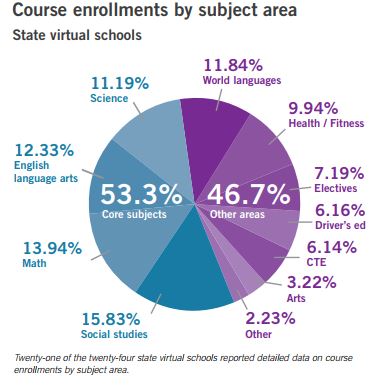 Core academic subjects make up 53 percent of total course enrollments. That’s down slightly from about 56 percent the previous academic year.

The biggest increase in any single category of online course-taking was in foreign language study, which rose from 6 percent of course enrollments in 2014-15 to nearly 12 percent in the most recent year.

The interest in foreign languages—and in many other online subjects—can almost certainly be traced to students’ desire to take courses that their home districts don’t offer because of financial or staffing constraints, said Robert Gemin, a senior researcher at the Evergreen Education Group. So those students look to the state virtual schools to fill the void.

In other cases, students are taking online classes “so they don’t tie up their schedule,” in their home schools, Gemin said.

A “very small number” of students enrolled in state-run virtual schools may be full-time students, Gemin said, but even in those cases, they will remain enrolled in their local schools. Typically, the virtual option is a short-term option.

In addition to the bump in foreign-language study, there has also been a spike in online enrollments in health and fitness classes, which made up just 3.5 percent of course enrollments in 2014-15, but now stand at nearly 10 percent. Many of those online classes probably ask students to keep some sort of a log of their activity, which parents then approve, Gemin said.

Shifts in student demand for supplemental online courses have implications for providers in the market. While many state virtual schools provide their own content, many of them also count on commercial providers to create courses in areas the schools cannot cover, Gemin said.