Some state support for local schools has not recovered from the deep cuts adopted during the Great Recession, according to a new study on education funding.

State funding for school districts accounts for an average of 47 percent of school budgets nationally. An analysis by the Center on Budget and Policy Priorities, a Washington-based, left-leaning nonprofit, found that 23 states are providing less “formula funding” on a per-student basis than they were before budget cuts in 2008.

“Formula” or “general” funding is where states spend most of their K-12 dollars, according to the researchers, and pays for the day-to-day academic operations of school systems directly. Total funding for K-12 from states, on the other hand, includes auxiliary spending such as bus transportation or employee pensions.

As of 2014, the most recent year with complete data, total state funding on a per student basis was still behind pre-recession levels in 35 states, according to the analysis. 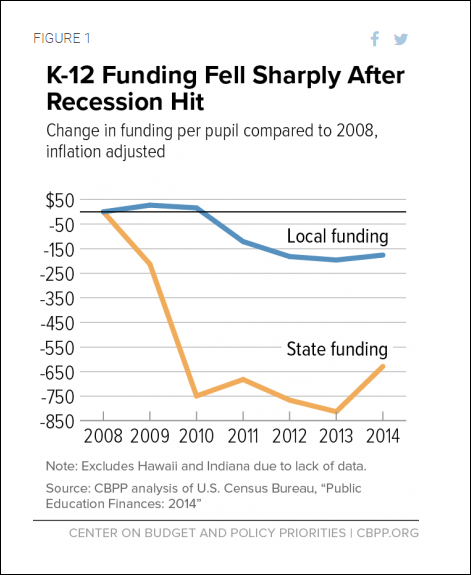 The researchers singled out five states in particular—Arizona, Kansas, North Carolina, Oklahoma and Wisconsin—for cutting formula funding by more than 10 percent, while also enacting income tax cuts. The study suggests these states made decisions that cost “tens or hundreds of millions of dollars each year rather than restore education funding.”

“In the long term, the budgetary savings from recent K-12 funding cuts may cost states much more in diminished economic growth,” the researchers wrote, citing academic studies that have found that increased funding for students correlates to higher graduation rates and higher future earnings.

One of the biggest statistics to emerge from the report is the news that the number of K-12 teachers and school workers is recovering even more slowly—still 221,000 jobs lower than the pre-recession peak, and only 130,000 jobs up from the 2012 nadir. Since 2008, the number of students enrolled in K-12 schools has risen by 1.1 million, according to the study.

The report also found that local funding—typically raised through property taxes—was negatively affected by the housing-market crash, although cuts don’t appear to have been as drastic compared to the evaporation of state funding. The federal government has also cut some programs such as Title I funding for high poverty schools due to budget constraints.

The state that has overseen the biggest increase in state funding for K-12 schools since 2008 is South Dakota, which boosted formula state funding by 27 percent. The economy in the Mount Rushmore State has been booming in recent years, mostly due to explosive growth in its energy sector.