When the CEO of a multi-billion dollar tech company shows up at a high school in Chicago to launch new products, you know he means business—in education.

That’s what happened today at Lane Technical College Prep High School, where Apple’s Tim Cook and his team announced the launch of a refreshed version of its 9.7-inch iPad, which costs $299 and supports the Apple Pencil, among other education-oriented product developments.

The optional “pencil,” originally introduced in 2015, can be used to write notes and draw illustrations on this version of the iPad, but it’s a separate purchase, adding $89 to the price of the product for schools. And a combination case-and-keyboard for the product is another $100.

These and other announcements signaled a move by the Cupertino, Calif.-based company to create excitement about its offerings to offset rapidly declining market share in the K-12 market over the past four years. Apple, which once dominated the K-12 space with its tablets, has been nearly buried in the schools market by competitors such as Google.

The most recent analysis of K-12 mobile device shipments by Futuresource Consulting, a London-based research firm, found that 14.1 percent of all mobile device products shipped in the fourth quarter of 2017 in the U.S. were produced by Apple. Of these, 10.6 percent were iPads (iOS in the following chart), and 3.5 percent were Macs. 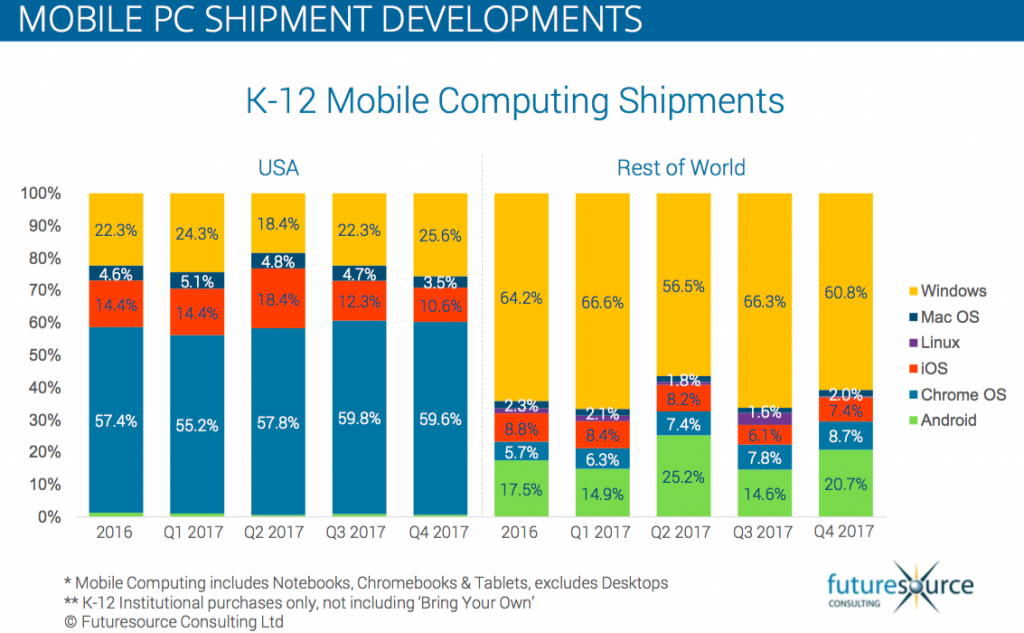 And an Education Week Research Center study last year found Apple to be at the back of the pack of three tech titans (Google, Microsoft, and Apple) in educators’ use of tools.

Still, Apple’s iPad and Mac devices are used in many schools, and “Apple Distinguished Educators” are a stalwart of the company’s outreach. Apple offers a variety of apps and tools for students, including ones focused on coding, music, and video. It also offers features to help teachers improve their skills and instruction and their use of Apple devices.

The updated 9.7-inch iPad’s new capabilities include Touch ID, a high-definition FaceTime camera, 10 hours of battery life, and an 8-megapixel camera, among other features. It is intended to challenge the dramatic dominance of Google Chromebooks in recent years, and the growth of Microsoft’s presence, with their digital devices for classrooms.

Beyond that, the company is emphasizing new features for the iWorks suite, including the ability for collaboration on creating books with pictures, and notes that are handwritten or illustrations that students or educators draw. With the Apple Pencil, teachers will be able to mark up documents on pages, much as they would grade a student’s work the traditional “pen-and-paper” way. School consumers can also purchase a Logitech “Crayon” for $49 that will work with the iPad.

The new Schoolwork platform, targeted for a June launch, will allow teachers to distribute assignments and oversee student progress. Apple has also increased cloud storage for students from 5 gigabytes to 200 gigabytes for schools.

A new Everyone Can Create iPad-based curriculum focuses on four ways the tablet and its software can be used in the classroom: photography, music, drawing, and video. Augmented reality apps can be used on the iPad, too, to show a student how his or her artwork would look on an easel in a real classroom or museum.

Two years ago, the nonprofit Technology for Education Consortium delved into the question of iPad pricing for different school districts. At the time, the group found that the price for the same iPads varied from about $370 to nearly $500 per unit.

As my colleague Sean Cavanagh reported, the data showed that the prices did not follow any pattern consistent with the size of the 40 districts, which included some of the nation’s largest, and other school systems with less than 8,000 students. The price was also not connected to volume, or the numbers of units bought by those individual systems, said Hal Friedlander, the consortium’s CEO and co-founder.

Just yesterday, a widely distributed article in The Hechinger Report arrived at a similar conclusion after analyzing purchasing documents for Apple products from 75 school districts. The journalists “found big disparities in prices on devices, warranties and professional development support. Five districts received double-digit percentage discounts, while dozens of others got no money off at all, even when making large purchases.”

Apple appears to be undaunted by the publicity. Some tech journalists expected to see the iPad price dropped to $259 for the school market. Instead, it remained at $299.

“They’re building in functionality and features rather than dropping the price,” said Ben Davis, a senior market analyst for education at Futuresource Consulting.

How do these new moves stack up?

Rather, the Apple announcement is playing to its strengths and sticking to its story as a standout in “creative applications, coding, multimedia arts, as the best solution,” he said.

App developers’ ability to build for the augmented reality functionality in this iPad could prove to be attractive to schools, Davis said, particularly as they refresh their device purchases, typically on four-year cycles.

The new features in the iWorks suite should help Apple compete with similar offerings from Google and Microsoft, reducing the incentive for schools using Apple products to do so in combination with productivity tools from competitors, according to Davis. “What Apple has shown today will be a compelling proposition for schools looking to invest in creative solutions,” he said.

As many schools enter their first four-year refresh cycle, Apple has distanced itself from its biggest flop in the market. Nearly four years ago, Apple landed a $30 million contract to bring iPads, loaded with a Pearson curriculum, to the Los Angeles school district. That effort fizzled after a series of high-profile setbacks. The fallout seemed to plague Apple as schools turned to other devices, particularly ones with attached keyboards, as they geared up for online assessments.

CORRECTION: This blog post was updated on Wednesday, March 28 to reflect the accurate share of the market for Apple in U.S. K-12 schools. In the fourth quarter of 2017, Apple shipped 14.1 percent of all mobile devices in the U.S. schools market, of which 3.5 percent were Macs and 10.6 percent iPads.

3 thoughts on “Struggling to Compete in the K-12 Market, Apple Makes Big Product Announcement at a School”