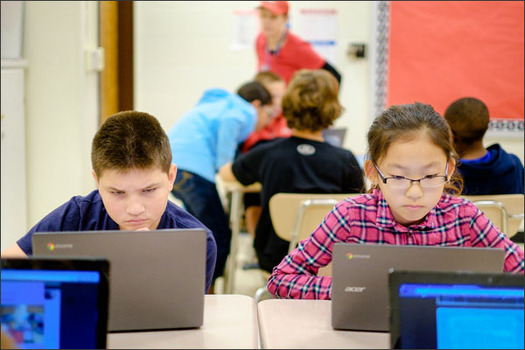 Students’ usage of tablets and smartphones in the classroom is high and has climbed from a year ago, according to a nationwide poll, which also sheds light on their frequency tapping into apps through mobile devices.

The results of the survey, released this month by Pearson and conducted by the Harris Poll, offer insights to the array of ed-tech companies in the K-12 market that count on schools’ and students’ use of mobile tools to deliver content.

According to the poll, 78 percent of elementary school students say that they regularly use a tablet, up from 66 percent a year ago.

At the middle and high school levels, tablet use has also jumped. Sixty-nine percent of middle-schoolers report using tablets, an increase from 58 percent the year before. A smaller portion of high schoolers, 49 percent, said they are on tablets, though that number has also jumped 7 percentage points from the previous year.

When it came to which devices students regarded as best for learning, students tended to favor laptops, notebooks, or Chromebooks, with tablets coming a close second, and smartphones not faring as well:

The survey shows that when it comes to learning on tablets, app use is highest at the elementary level, where 69 percent of students reported using those tools, compared to 60 percent in middle schools and 50 percent at the high school level.

On smartphones, the usage of learning apps was less frequent, with just 43 percent of all students polled saying they rely on them. See the breakdown, below:

Among other intriguing findings from the Pearson survey:

The Pearson “Mobile Device Survey 2015” was administered online in February and March among 8-18 year-olds enrolled in grades 4-12. It was conducted among 2,274 total students.