Companies doing business with schools and looking for insights on the nature of the K-12 workforce are likely to find useful, and in some respects surprising data in a new report published by the Thomas B. Fordham Institute.

One of the most striking takeaways: Districts today are much more reliant on teacher-aides and non-teaching staff than they were a generation ago. In 1970, teacher-aides made up just 1.7 percent of district personnel. Today, that number is nearly 12 percent.

On the whole, the percentage of non-teaching staff has risen from 40 percent of the district workforce to 50 percent during that same period.

The portion of teachers on staff, meanwhile,  fell from 60 percent to 50 percent during those four decades. That’s not to say the actual number of teachers fell during that period—it in fact has risen pretty much steadily since the 1970s. It’s just that the numbers of non-teachers rose much faster during that time, meaning non-teachers now account for a bigger percentage of personnel. (See my colleague Denisa Superville’s breakdown of the overall results on the District Dossier blog.)

The author of the report, Fordham Research Analyst Matthew Richmond, cites several factors in the growth of non-teaching personnel. Most notably, the growth was driven by the passage of federal legislation mandating services for students with disabilities, bilingual students, gifted students, among others, and by the expansion of support services in schools.

Those patterns were not uniform across states, or districts. Rural school systems, in particular, were much more likely to have higher portions of teacher-aides than their urban counterparts. (The report includes a link to an interactive, nationwide map on the presence of teacher aides in districts.)

Richmond attributes that to the difficulty rural districts have in recruiting and keeping highly skilled staff in specialized areas—which in turn makes them more likely rely on aides to fill those roles.

The broad differences between urban-vs.-rural characteristics is clear in this breakdown of staffing in Florida and Texas. The teacher-aide ratios are at least double or triple as high in rural areas, shown in the bottom rows: 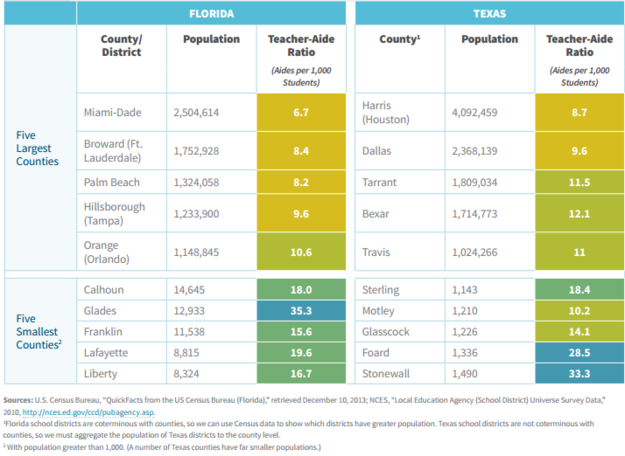 Overall, since 1950, school staffing has risen 500 percent, according to Fordham, a conservative-leaning think tank in Washington. The United States, the authors say, also spends more on non-teaching staff than almost any other industrialized nation that is part of the Organization for Economic Cooperation and Development.