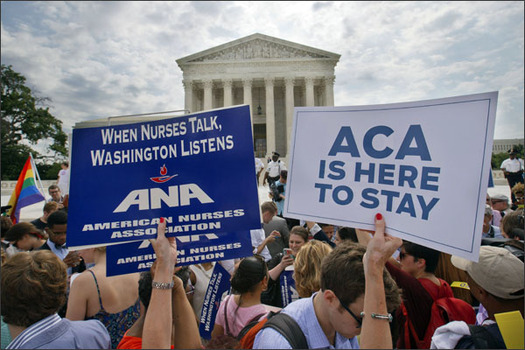 The U.S. Supreme Court on Thursday upheld a crucial provision in the federal health-care law that gives subsidies to millions of uninsured Americans, in a ruling that disappointed opponents who have said the statute will hurt K-12 districts financially.

The court ruled 6-3 in favor of the Obama administration—with Chief Justice John Roberts writing the majority opinion—concluding that the subsidies are necessary to the law functioning as Congress intended.

The plaintiffs who brought the King v. Burwell case before the Supreme Court argued that the Affordable Care Act was illegal, basing a key piece of their argument on a single turn of phrase in the sweeping, contentious law.

The health-care law currently gives consumers access to subsidized health insurance through exchanges established by their states, or those facilitated by the federal government in states that don’t have their own.

But roughly two-thirds of the states chose not to set up their own exchanges, a decision driven mostly by Republican state officials’ opposition to the law. Uninsured residents of those states have instead been able to turn to federal exchanges. The Internal Revenue Service has said that individuals in those states can receive subsidies through a federal exchange.

The plaintiffs in the King case, however, contended that the language of the Affordable Care Act doesn’t allow individuals in states that didn’t establish their own exchanges to receive health-care subsidies through the federal program. They pointed to wording in the law that grants subsidies for insurance purchased on exchanges “established by the state.”

By that rationale, the plaintiffs argued, the law does not allow subsidies to flow to individuals in those states that did not create their own exchanges.

But Chief Justice Roberts ultimately did not buy the plaintiffs’ reasoning.

While “[the] petitioners’ plain-meaning arguments are strong,” the law’s overall context and structure suggest the statute “allows tax credits for insurance purchased on any exchange created under the Act,” Roberts wrote in his decision.

“Those credits are necessary for the federal exchanges to function like their state exchange counterparts, and to avoid the type of calamitous result that Congress plainly meant to avoid,” he said.

The Supreme Court case was similar, but not identical, to a separate legal challenge pending before a federal court in Indiana, which is focused on the obligations of school districts under the health care law.

That case was brought by the state’s Republican attorney general and a group of school systems, which are not only challenging the subsidies but also the law’s provision requiring employers of a certain size, including districts, to provide health insurance.

In a statement on Thursday, Indiana Attorney General Greg Zoeller said the Supreme Court decision “will help answer some but not all of the issues” raised in the state’s legal challenge.

“Our state’s aim has never been to cancel IRS tax-credit subsidies for our citizens,” said Zoeller, who said his office is still reviewing the Supreme Court’s decision. “But it is vitally important to ensure the national health care system is based on a firm legal and constitutional foundation.”

Specifically, Zoeller said that even though the Supreme Court upheld the IRS tax-credit subsidies in exchanges not operated by states for private-sector employers, “there is still an unresolved question” about whether government employers can be hit with tax penalties under the health-care law.

The attorney general said he hopes a federal court in Indiana, which is hearing the state’s case, will address that question “in light of the potential for multimillion-dollar tax penalties” on the state and other government employers—presumably schools.

Next Steps in Indiana

The Indiana case had been pending the outcome of King v. Burwell, Zoeller said. He said he will now ask the Indiana federal court to schedule proceedings on the case.

In a statement released by the Indiana attorney general’s office, Rod Gardin, the superintendent of the East Porter, Ind., County School Corporation, one of 39 school plaintiffs in the lawsuit, said his system has been forced to cut hours of support staff to avoid costly sanctions under the law.

“We are disappointed with the decision … which offers no relief from the financial penalties imposed by the ACA,” Gardin said.

The school superintendent said he would work with Zoeller to seek “an appropriate remedy” from the law’s provisions. He also asked for help from the U.S. Congress, which he said should make changes to ease the law’s mandates on employers to provide health coverage.

Len Nichols, who has studied the law as director of the Center for Health Policy Research and Ethics at George Mason University, in Fairfax, Va., said in an e-mail he believes the Indiana attorney general is correct about the Supreme Court’s ruling having not addressed a question raised in the state’s legal fight—on whether public employers are subject to the employer mandate’s requirements and penalties.

Nichols, in an e-mail, added that he’s convinced—as is “most of the legal world”—that public employers are, in fact, required to follow those rules. He supported the creation of the Affordable Care Act.

But “there is still an issue to work with, if the AG wants to pursue it,” he added.

Photo: Supporters of the Affordable Care Act celebrate as the 6-3 ruling upholding the law is reported outside of the Supreme Court on Thursday in Washington. –Jacquelyn Martin/AP

2 thoughts on “Supreme Court Upholds Obamacare, in Setback for K-12 Opponents of Law”