Teachers are particularly shrewd shoppers when it comes to everything from making online purchases to choosing financial services, according to a pair of recent nationwide surveys.

The surveys, released by MDR, which provides market research on K-12, almost certainly offer insight for companies trying to sell various products to educators who are either buying to meet their classroom needs—a widespread practice—or making purchases in their personal lives, away from school.
On the whole, teachers represent a “prime market for a wide range of consumer goods and services,” according to one of the surveys, titled “Teachers as Consumers,” which was paired with a supplementary report focused on educators’ media preferences. “As a group, they are affluent, active, well-informed, and interested in the world around them.”

When shopping, teachers tend to gather information from a variety of sources, compared with their peers outside of schools: 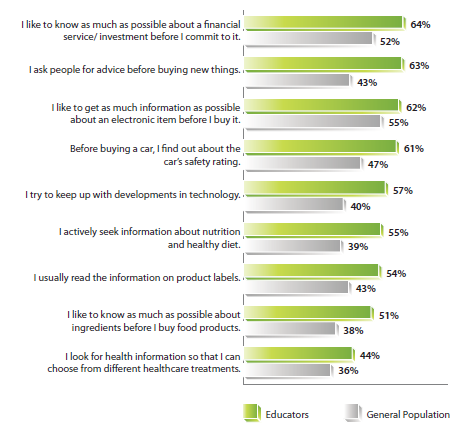 Teachers also appear to be more reliant on the Internet to get information about products and services than the general population: 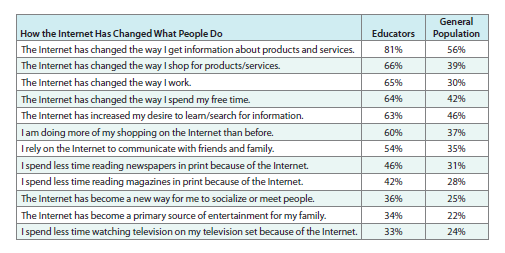 How are teachers getting information? Books in print, and newspapers, despite the perennial talk of their demise, still rank high on their reading lists: 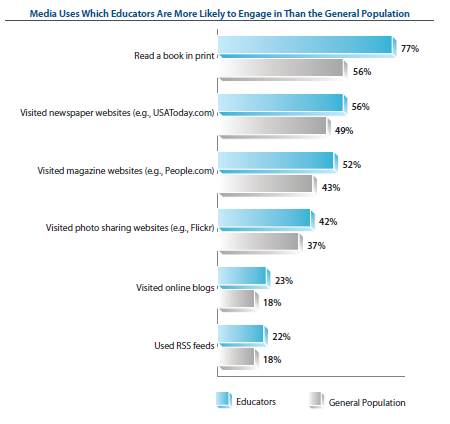 The “Teachers as Consumers” survey was conducted between April 2011 and June 2012. There were more than 25,000 respondents in the national survey, 804 of whom were teachers or others in the education-service industry, MDR said. For the survey of media preferences, 16,217 people responded, nearly 700 of whom were educators. Those interested in obtaining a full copy of the reports should contact MDR at mdrinfo@dnb.com.