A survey of nearly 2,000 Harvard Business School alums revealed continued pessimism about the United States’ future economic competitiveness, and about the quality of America’s schools.

In a report released this week, the business school indicated that 47 percent of its alumni expect a deterioriation in U.S. competitiveness over the next three years, and they saw little improvement in the K-12 education system, which contributes to the country’s competitive position as it prepares students who will enter the workforce.

U.S. competitiveness depends upon the ability of American companies to win in global markets, and to lift the living standard of the average American. “The U.S. economy is doing the first of these, but failing at the second,” said Michael E. Porter, a professor who co-chairs the business school’s U.S. Competitiveness Project, in a statement.

The report also found that the Harvard Business graduates in large and mid-sized firms were the most optimistic about competitiveness. “Small businesses and the working and middle class are not making gains,” said Jan W. Rivkin, a professor of business administration at the school who co-chairs the Competitiveness Project, and co-authored the study, in a phone interview.

He called this a “very dangerous moment” in the recovery. “There’s a tendency to want to breathe a sigh of relief and say, ‘That’s behind us,’ when in fact there’s a lot of structural work to do on the economy, as well as the educational system.”

The alumni said they saw only small signs of progress in the United States’ K-12 system, a modest level of improvement on par with recent changes in the U.S. tax code, political system, and regulatory policy.

Underscoring the urgency to find solutions to help K-12 students in the U.S. were the findings in last year’s study from the Program for the International Assessment of Adult Competencies, the Harvard co-authors wrote. It showed that Americans’ on-the-job competency lagged relative to workers from other countries.

Rivkin noted a disconnect between business leaders and many K-12 officials in their views of the private sector’s engagement in school systems. That disconnect is evident in results from a separate study of school superintendents, conducted by the business school and the Boston Consulting Group last year, the findings of which are used as a basis of the recent report.

“There’s a real lack of shared reality between education leaders and business leaders on the current status of the education system,” said Rivkin. 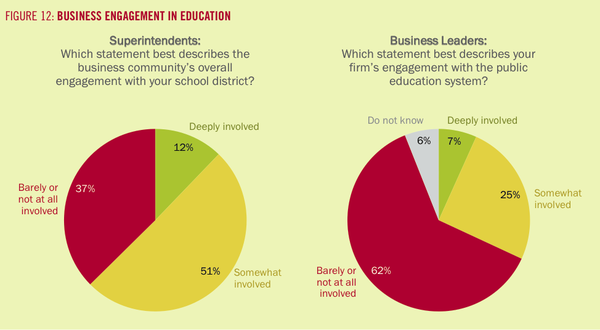 For the superintendents study, surveys were sent to the top 10,000 school districts, and 1,118 superintendents responded. Just 3 percent of those school officials rated business leaders as “well-informed” about public education. But in the compentitiveness survey that was just released, 35 percent of Harvard Business alumni described themselves as “well informed” about public education, which the study’s authors wrote is an indication that “we may be in the worst scenario—in which business leaders are not well informed but believe they are.”

When superintendents were asked how business leaders could better engage with public schools, they “urged business leaders to learn before they opine,” Rivkin said. The K-12 leaders wanted the corporate executives to take the time to visit schools, learn what goes on there, understand the differences between a school and a business, and ultimately, jump in and help, inviting “deeper engagement” than simply “checkbook philanthropy.”

The authors of the report said business leaders could take the following steps to engage more deeply in education:

Even businesses with a more local or regional presence can get involved in supporting local schools. For example, the National Academy Foundation has been developing career curricula for schools to adopt. A local business could support local schools in adopting that curriculum, he said.

Rivkin said it’s up to business leaders to educate themselves about K-12 schools and the process through which the talent that fills their workforce is generated.

“There’s been a massive effort, particularly among global companies, to manage their supply chains with great efficiency and expertise,” he said. “There’s not an equivalent rate of progress on the management of the ‘supply chain of talent.'”

SOURCE: The chart above is from “An Economy Doing Half Its Job: Findings of Harvard Business School’s 2013-14 Survey on U.S. Competitiveness”