Roughly half the amount that the nation’s public school teachers are spending on educational products is being covered with their own money, a new nationwide survey shows.

All told, teachers spent about $3.2 billion on various types of supplies and materials during the 2012-13 academic year, according to the survey, released recently by the National School Supply and Equipment Association. Half that total amount, $1.6 billion, came out of educators’ own pockets.

The per-teacher breakdown is as follows: The average educator forked out about $198 of their own money on instructional materials, $149 on school supplies, and $139 on other classroom materials, for a total of $485 last academic year, according to the survey.

In total, nearly all teachers—99.5 percent—reported digging into their own pockets to cover the costs on classroom supplies or materials, according to the association. The portion of teachers doing so appears to have risen over time. (See the chart from the survey, below.)

The majority of educators, 55 percent, did their shopping at discount stores, an increase from 30 percent from one of the association’s previous surveys, in 2006. Just 9 percent said they spent their own money at “parent-teacher” stores, the survey says.

Some teachers also headed online to make those purchases: Sixteen percent reported buying over the Internet when they needed to buy their own educational products, a number that has risen over time, the authors said.
Teachers are also downloading items for free from the Web. Eighty percent reported obtaining math and spelling worksheets that way; more than 40 percent did so for mazes and learning games, and smaller percentages did so for holiday decorations, maps, and other items.

The survey was based on responses collected from about 400 elementary, middle, and high school teachers. The association released a summary of the survey findings to Education Week. The full report is available at a cost from the association, a trade organization based in Silver Spring, Md., representing suppliers and distributors of educational products, among others. 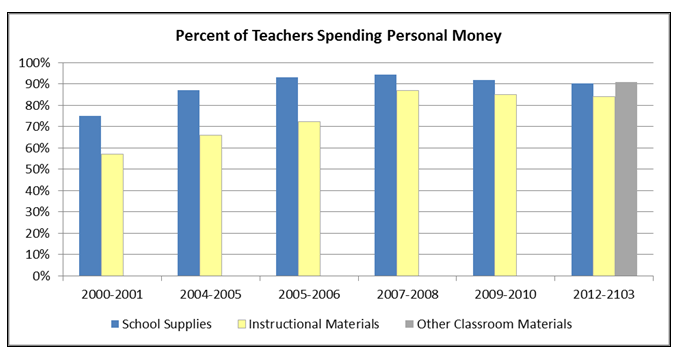 For a visual look at the breakdown of what teachers are spending their own money on, check out this graphic:

17 thoughts on “Survey: Teachers Digging Into Own Pockets to Buy Education Products”