Teachers face an array of hurdles that stymie their ability to use data effectively. One roadblock trips them up more often than any other: a lack of time.

The time squeeze is the barrier cited most often by educators as standing in the way of using data to inform their teaching practices and  improve student learning, a newly released survey found.

The results, released by the Data Quality Campaign, are in one sense not surprising, given the time pressures teachers face and the array of responsibilities they’re forced to juggle.

But they also serve as a reminder to policymakers–and to companies developing products–of the day-to-day hurdles that educators encounter in trying to make sense of classroom data and analytics focused on student performance and other metrics.

Schools today expect vendors to provide them with a wide variety of data, a recent survey by EdWeek Market Brief found. The overwhelming demand is for data that provides details on gains in student achievement; but they also want data on the cost-effectiveness of products, and teachers’ usage of them, the survey found.

The new survey, conducted by the Harris Poll for the Data Quality Campaign, found:

Asked in a separate question to identify the number-one barrier they face in using data effectively, teachers also said time concerns are top of mind: 52 percent named it as the top obstacle. Lack of training came in a distant second, at 12 percent.

The Data Quality Campaign is a Washington-based organization that advocates for improving the use of data in schools and increasing the public’s understanding of its value. The survey was conducted online in May of this year of 762 full time, grade K-12 teachers around the country. The Harris Poll did not cite a margin of error due to a number of factors that influence error beyond the sample size, according to the Data Quality Campaign.

Many school districts are becoming increasingly reliant on data to analyze students’ strengths and weakness, and for other purposes. They also have to weigh concerns about meeting legal obligations and parents’ expectations that they will protect students’ data privacy.

Educators also see data as a bridge to reaching out to parents, according to the survey: 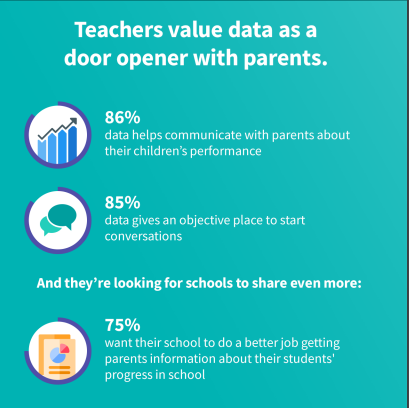 The survey results are a reminder that educators count on their school and district bosses to carve out time for them to analyze data, or it’s not likely to happen, said Elizabeth Dabney, the director of research at the Data Quality campaign, in an interview.

“We can’t make more time during the school day, but we can be more strategic” in helping teachers make use of the information given to them, she said.

Likewise, when teachers vent about having having too much data thrust at them, and not being sure what to do with it, there are lessons for a variety of players, including vendors, said Dabney.

The starting point for school districts, and for K-12 companies, should be asking teachers what specific data will help them do their jobs more effectively, she said. That piece of the research is often overlooked.