More than nine out of 10 teachers say they seek out academic research from journal articles at least once a year, although they are ambivalent at best about the timeliness of that material, whether it’s decipherable, and their ability to apply it to their work, a new survey finds.

The results were published in a report, “Educator Voices on Education Research,” by the Jefferson Education Exchange, a nonprofit backed by the University of Virginia’s Curry School of Education and Human Development and the Strada Education Network, an organization focused on education and employment.

The exchange has conducted research exploring ways to make research useful and relevant to K-12 education, and the barriers that keep schools from putting it to use.

“Educators are accessing research, but they don’t always use that research to directly inform their practices,” said Emily Barton, a research assistant professor at the Curry School, who is also director of implementation research at the exchange.

One of the standards for judging academic work focused on K-12 schools, she said in an interview, should be that scholars are “doing the research educators need.”

The online survey was given to 1,334 educators from all 50 states and the District of Columbia. The exchange had distributed the survey at meetings it staged last year among educators, with the help of a group of 64 education-focused associations, who came together to discuss how academic research could better reflect schools’ practical needs. 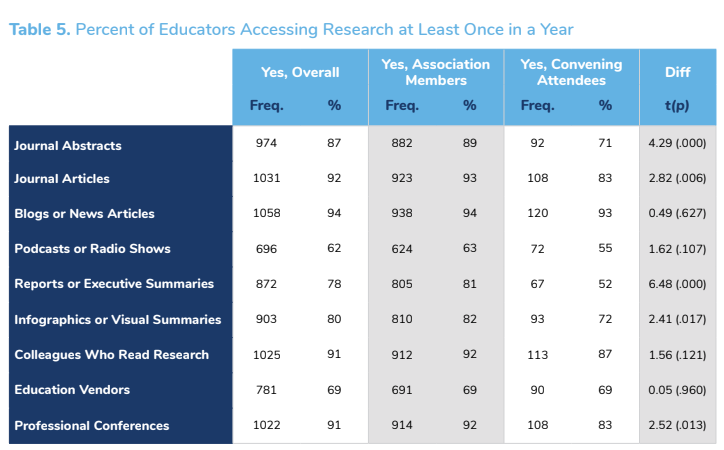 The survey is not nationally representative, and the makeup of the pool of teachers surveyed could skew toward those who are relatively research-savvy. But the results nonetheless offer insights to higher education officials, funders, and K-12 officials trying to make sense of why academic research is often of little use to educators, said Bart Epstein, the CEO of the Jefferson Education Exchange.

The gap between academia and K-12 schools was driven home by a second, follow-up survey of  157 educators, also conducted by the exchange. It found that just 16 percent of teachers said they use research to inform their practices.

The findings have implications for K-12 companies, many of whom invest in conducting research of varying degrees of rigor on their products. Some vendors invest in achieving positive research results. But they’re often unclear on whether teachers, and administrators making decisions about buying products, are paying attention to that evidence, or more inclined to select products and services based on other factors, such as word-of-mouth recommendations from peers.

Many vendors aren’t sure what kinds of academic research districts value — or how they can build that research base. EdWeek Market Brief explored those options in a webinar, now available on-demand. You can access it here.

A Fear of ‘Overselling’

Among the report’s findings:

One of the reasons academic research is disconnected from classroom practice is that there aren’t strong incentives in the postsecondary world, or anywhere else, to close that gap, said Epstein.

Currently, too much academic research is conceived without significant input from educators, and when it’s published it floats “into the ether,” he said. It’s up to teachers to try to do the heavy lifting and figure out how to make academic work relevant to trying to improve the teaching and learning.

Ideally, the value of academic research would be judged on metrics such as the number of teachers who end up changing their instructional practices based on it, said Epstein.

“Right now, there’s not a good mechanism for that to happen,” he said.

There are also longstanding norms and customs that stand in the way of turning academic research into practice, said Barton. One is that academic researchers are generally reluctant to step outside of their research in a way that comes across as advocacy, or “overselling” a finding, she said.

Classroom teachers, by contrast, might love it if they did more of that.

“Educators want the next step [in using] the research,” Barton said. “Educators would like us to give clear direction that aligns with their context.”

8 thoughts on “Teachers Say They’re Consuming Research. Putting It to Use Is Another Story”