Educators’ use of a wide variety of digital tools and platforms–from instructional videos to learning management systems to openly licensed content–has risen over the past year, according to a new survey.

Teachers’ use of ed-tech increased significantly for 9 out of 13 different types of ed-tech they were asked about in the survey, which was conducted by Houghton Mifflin Harcourt, one of the country’s biggest K-12 companies, and YouGov, a market research and analytics firm.

The survey, released this week, also asked educators about the biggest barriers they face in using ed tech. Fifty-two percent said they see “lack of time to plan for integration” of digital resources in instruction as an obstacle.

Forty-two percent of respondents, meanwhile, said that lack of connectivity and devices outside the classroom is a barrier. The same percentage that said lack of internal connectivity in schools is an obstacle.

In addition, a  shortage of professional development and training focused specifically on using digital curriculum was also cited as a common hurdle to sound ed-tech use, the survey found.

Yet despite those hurdles, the survey found that from 2017 to 2018, teachers’ use of a variety of ed-tech devices, strategies, and systems have risen.

Among the ed-tech that teachers are using more than they were a year ago: videos from an instructional program or open source, which 66 percent of respondents said they use; free or paid digital resources via a professional online community, used by 58 percent of teachers; free or open-source digital content, used by 57 percent; and learning management systems, used by 51 percent.

Here are some categories of tools and platforms that educators said are on the upswing: 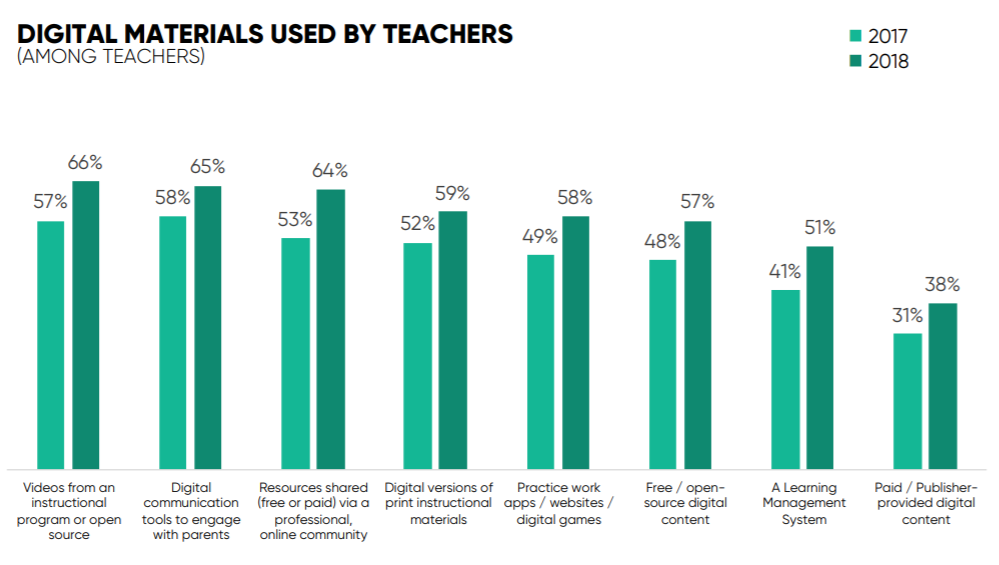 Among the survey’s other findings about educators’ attitudes toward, and uses of, ed tech:

The finding that teachers with more years of experience feel squeezed for time in making ed-tech work for them is probably not surprising, said Francie Alexander, HMH’s chief research officer.

Additional findings in HMH’s survey show that longtime teachers are more likely to cite lack of ease with ed-tech as a barrier to using it effectively, Alexander explained in an e-mail.

It follows that many of those veteran educators are less tech-savvy and feel they need more planning time to get over the hump, she said.

The nationally representative survey was conducted online. It is now in its fourth year. Of 1,281 respondents, about 90 percent were teachers and 10 percent were K-12 administrators. The results were weighted to reflect national norms for regional representation, gender, and a mix of grades.

The survey’s findings about educators’ worries about lack of internet connectivity inside schools is, in one sense, surprising. Recent data have shown that access to high-speed internet in the nation’s schools has surged in recent years.

More than 44 million students are learning classrooms with high-speed web connectivity, up from just 4 million five years ago, according to data released this year by the nonprofit advocacy group EducationSuperHighway. The organization cites changes to the federal E-rate program as one factor driving the improvements.

Yet while EducationSuperHighway argued that the wave of connectivity amounts to “incredible progress,” it also noted that many districts, particularly in rural and hard-to-access areas, do not have fast and reliable internet.  The struggles of educators working in those poorly connected communities may be reflected in HMH’s survey.

2 thoughts on “Teachers’ Use of Ed-Tech Tools Rises Across the Board, But Time Pressures Persist”