Word-of-mouth recommendations have long been viewed by ed-tech companies as critical to either elevating or undermining their products’ chances of success in the K-12 market.

If teachers and administrators like a product, the thinking goes, they’ll talk about it and spread what they know to their peers, who pay close attention to that peer-to-peer advice—perhaps a lot more than they pay attention to other, more empirical sources.

Newly released survey results shed light on the power of teachers’ voices in how school districts choose digital products. Put forward by the NewSchools Venture Fund and Gallup, the survey found that overwhelming majorities of teachers, principals, and administrators say teachers are the sources they trust most when selecting digital learning tools.

The federal Every Student Succeeds Act requires the use of evidence-based strategies and programs in efforts to turn around low-performing schools. States play a big role in setting those evidence standards, and they’re already having an impact on K-12 companies. In a webinar Oct. 22, EdWeek Market Brief will look at how the evidence requirements are playing out in states, and among district buyers around the country. You can sign up here.

Ninety-four percent of educators said that they turn to teachers for input on ed-tech they’re selecting for the classroom. That’s a higher percentage than those who said they trust other sources, such as reviewing information online (84 percent), looking to social media (58 percent), and lists provided by their districts (49 percent).

Asked in another question to choose up to three resources they trust most in choosing ed-tech products, 81 percent of teachers surveyed named other educators. Eighty-seven percent of principals surveyed also named teachers, as did 84 percent of K-12 administrators who were surveyed.

“It says a lot about the way teachers have come together, and see each other,” NewSchools Venture Fund CEO Stacey Childress said in an interview. Educators see their peers “not just as valued colleagues, but as sources of real professional wisdom, including [around] digital learning tools.”

The reliance on educators’ as experts about ed-tech products dwarfed the weight that K-12 officials placed on internet searches, education conferences, and evidence-based reports, the survey found. See below: 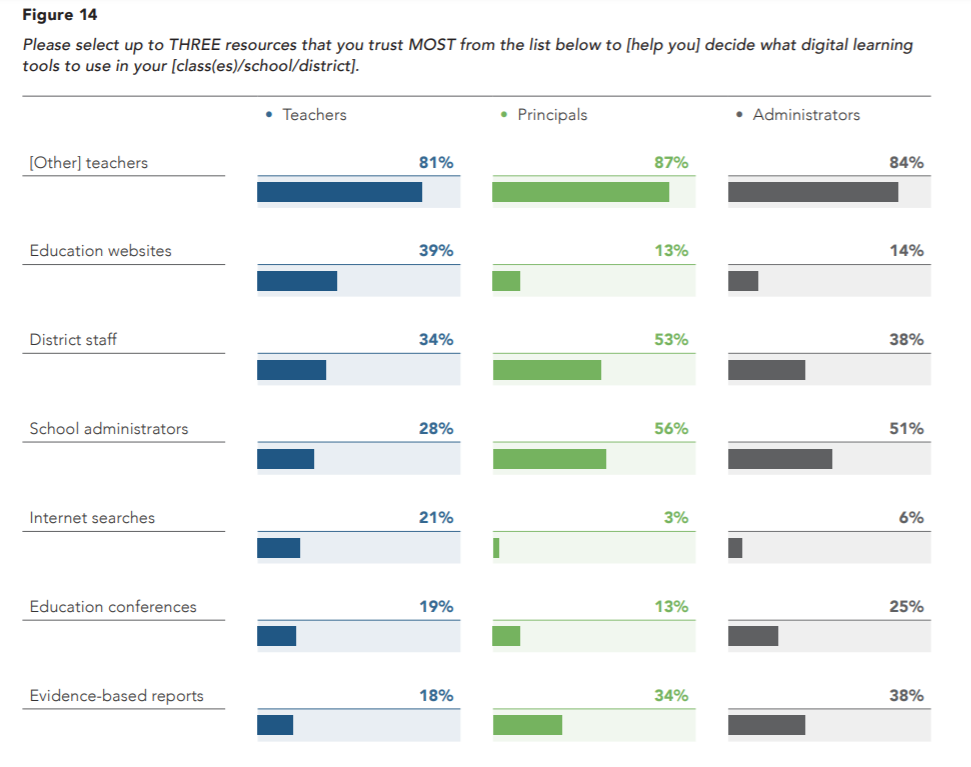 Gauging teachers’ influence over purchasing is difficult, and it can depend on the question that K-12 officials are asked.

For instance, in a survey of 500 district leaders released last year by EdWeek Market Brief, more than 50 percent of administrators said they rarely or very rarely adopt products for district-wide purchase based on recommendations of teachers who test those tools in classrooms. But the numbers varied by the size of the district.

The NewSchools/Gallup report is based on an online survey of 3,210 teachers, 1,163 principals, 1,219 district administrators and 2,696 students who completed or partially completed surveys. The sample of teachers surveyed included pre-K-12 public school teachers who teach math, science, English/language arts or reading, history/social studies, among other subjects.

Childress said she was not surprised that teachers were viewed by their peers as trusted sources of information about ed-tech products. But she found the degree to which they’re seen as arbiters of ed-tech quality “astonishing.”

She noted that in a report the Bill & Melinda Gates Foundation released just four years ago, titled “Teachers Know Best,” a substantial but smaller percentage of teachers, 56 percent, said they choose digital tools recommended by other educators. Forty-seven percent of teachers in the 2015 survey said they rely on principals or other administrators for information. (Childress used to work as a top education official at Gates.)

At the same time, the new survey found that teachers were not impressed by the amount of evidence they have for judging ed-tech products.

The results show that  “teachers are intensely interested in the digital learning tools they’re adopting, or that their schools have adopted,” Childress said, yet “they are dissatisfied with the information that is available to them in a form that means something to them.”

There’s clearly a “mismatch out in the world between what a digital learning tool might be able to do, and what teachers, and principals and district administrators are trying to get done,” she added. “The field has to address it in a more productive way.”