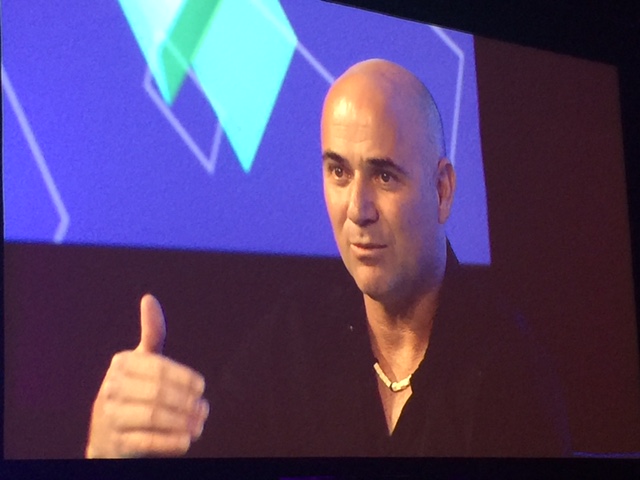 Andre Agassi, who was once the number one tennis player in the world, has helped build 70 charter schools in the past four years, educating 33,000 students. And that’s just the beginning, he told hundreds of attendees at the 2017 ASU/GSV Summit here Wednesday.

Agassi described his passion for education, his drive to scale up successful charter schools across the nation, and the business model he’s using to do so in an interview with sportscaster Ted Robinson.

“It took me 14 years to build one school in Clark County [Nev.] for 1,300 students,” said Agassi. That school, the Andre Agassi College Preparatory Academy, is a K-12 public charter school that educates students in a low-income neighborhood of West Las Vegas. The academy was constructed with $40 million raised by the Andre Agassi Foundation for Education.

But Agassi, a native of Las Vegas, was dissatisfied with his ability to serve the community. “There are 3,000 kids on a waiting list. In the world I come from, that means I’m twice the failure I am success,” he said. And, he figured, philanthropy is limited to only the funds that his foundation, or others, could afford to pay.

Agassi’s frustration prompted him to look at the problem of how to scale “best-in-class charter schools,” while acknowledging that 85 percent of charter schools have not produced better student outcomes than their traditional counterparts. “I’m not interested in scaling mediocrity,” he said.

He realized that the challenge facing the most successful charter school leaders was that, while they get charter licenses, “they can’t access public dollars for their facility,” he said, so he began to look at options to solve that problem.

To solve the infrastructure issue, Agassi thought: “What if we could come to the table with the capital to actually build the facility?” he asked, “which would relieve over-crowded school districts, by the way, and it doesn’t cost the taxpayer” anything more to do so. “We’re going to build a school for somebody who knows how to educate kids. We’re not going to play landlord,” he said.

Agassi partnered with Bobby Turner of Southern California, who is the co-managing partner and CEO of Turner Impact Capital in Los Angeles. “We hammered out a business model,” went to the private sector and sold it, he said.

That’s how the Turner-Agassi Charter School Facilities Fund launched in 2011, followed by a second round, Turner-Agassi II, in 2015. The fund had plans to invest up to $1 billion for the development of as many as 130 schools in high-need areas nationwide by 2020, when it was announced. Among investors are the University of Michigan, the Texas General Land Office, Citi Community Capital, and a diverse group of institutional investors and family foundations.

Charter Schools Opening Across the Country

Turner-Agassi II oversees school site selection and acquisition, as well as design and construction. Facilities are leased to charter operators at affordable rates. Once the schools reach full occupancy, the school operators can purchase them with help from the fund, using New Market Tax Credits, tax-exempt bond offerings, traditional bank financing, or funding from the U.S. Treasury’s Community Development Financial Institutions Fund, according to the announcement form the fund.

This model has resulted in the opening of schools from Florida to Pennsylvania, Texas to Tennessee, Arizona to California, he said. “The metrics are real estate value versus per pupil allocation,” he said. San Francisco and Los Angeles are unlikely to be charter sites, because of their high real estate values and low per-pupil allocations, he said.

Charter schools that have been funded through the Turner-Agassi fund have included KIPP, Rocketship, Academica, Franklin Academy and Lighthouse Academies.

“It’s incredible that academies would define my life on both ends of it–the academy I got sent to that shaped the trajectory of my life and the academy I built,” said Agassi, who was forced by his father to drop out of school in the 8th grade to attend a tennis academy in Florida thousands of miles from home so he could pursue the sport.