We’ve been whipsawed a bit in recent weeks by survey results that offer somewhat contradictory findings about the public’s views of education, and testing in particular.

First came a recent Education Next poll that suggested that public antipathy toward testing, and interest in opting out, wasn’t as strong as rhetoric might suggest. But a new PDK/Gallup poll, released today, finds broad skepticism about testing, as well as the common-core standards. (See my colleague Corey Mitchell’s more complete breakdown of the results, with reaction.)

What does this mean for K-12 businesses?

It’s probably safe to assume that K-12 companies involved in assessment, curriculum, and other areas aren’t going to be making strategic decisions based on a few survey results, however compelling.

But nor can companies gloss over results entirely. Public sentiment tends to press upward and force political action by policymakers—who take steps at the federal, state, and local levels that have a direct impact on the market for standards, testing, and curriculum.

So what are some of the results in the PDK/Gallup poll that K-12 companies should be paying attention to? Here’s a selected sample: 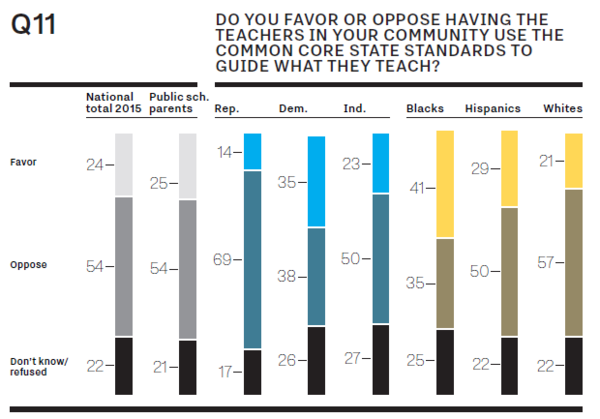 The poll is based on a nationally representative, Web-based survey of 3,499 Americans, and a phone survey of 1,001 Americans, all of whom were ages 18 and older. The margin of sampling error for the phone survey was 4.8 percent; for the Web-based poll, it was 3 percent.

Some of these results won’t surprise the business community. But they’re one indication of where public sentiment stands, and where K-12 policy may be going in the years ahead.